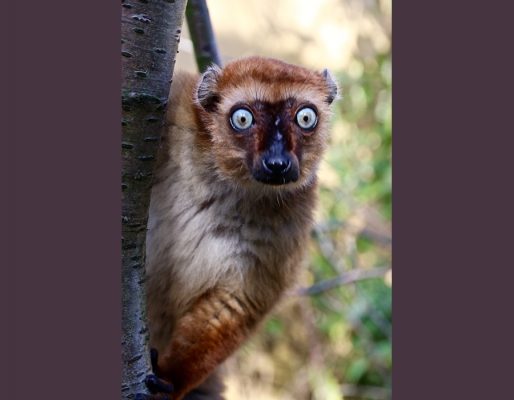 Action for the Wild continues to support the AEECL

Colchester Zoo’s Action for the Wild was a member of the AEECL, the Lemur Conservation Association, between 2004 and 2014 and reinstated its membership in 2017. AEECL is a charitable NGO run by a consortium of 30 European zoos, working for Madagascar's highly endangered lemurs, through cooperation with the Malagasy people.

The Sahamalaza region has been in AEECL’s focus of scientific and conservation interest since 1988. The critically endangered blue-eyed black, or Sclater’s lemur is endemic to this part of Madagascar, and has been selected by AEECL as the flagship species for all conservation efforts concerning the region.

For many years AEECL, with the Malagasy protected areas authority (MNP), worked towards the implementation of a national protected area on the Sahamalaza Peninsula. Their first goal was reached in 2001, when UNESCO declared Sahamalaza a biosphere reserve. The region was finally declared a National Park in June 2007.

The AEECL aims to protect the habitat and ecosystems within the Sahamalaza peninsula, monitor and increase lemur populations and be a strong conservation ambassador for the area. A vital part of the work of the AEECL is to monitor the lemur numbers and research the local ecosystems to have a better understanding of the pressures faced by these habitats. Local villagers are employed as Research Assistants who are all trained to use GPS tracking devices and record lemur numbers, behaviours and patterns. The AEECL has a long established research station in Ankarafa and is currently building a 2nd station in another forest area.

Unfortunately forest fires are common throughout Madagascar and can cause much devastation so the AEECL are pro-active in preventing the spread of these fires and are passionate about educating local communities about the importance of environmental protection for the surrounding ecosystems. To help prevent the spread of fire outbreaks, the AEECL joins forces with local villagers, local government and other organisations annually to establish firebreaks around the forests. These firebreaks are vital to protect the forests and the wildlife within. The last firebreak working party took place in August 2017, was attended by 860 people and 7km of firebreaks were established. The AEECL are also heavily involved in reforesting areas affected by fire outbreaks and planting areas that could reduce forest fragmentation and too provide a long term resource for villagers.

The AEECL believes that supporting the local communities is vital to ensuring the future for the wildlife and forests of the Sahamalaza peninsula and a good proportion of staff time and funds are utilised to improve the education system of the communities local to their work. To help, each year, AEECL sponsors 50% of the salary for 70 teachers to alleviate financial pressures on communities. There is an active and evaluated education programme with a strong message about environmental issues. Many schools have been renovated and in the past few months, and the AEECL have finished constructing its 2nd new school in the village of Ambinda.

By investing in local communities through education, resource management and communication, this helps ensure the communities of today can forge a safe haven for wildlife tomorrow.