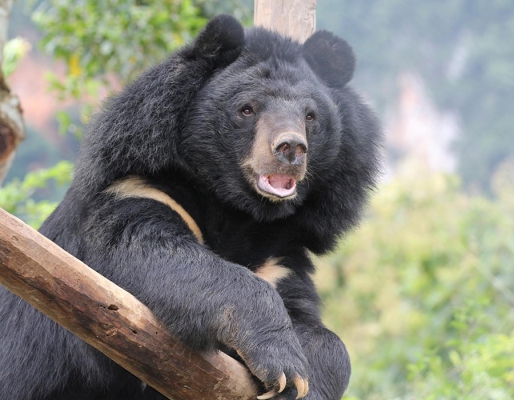 An update from Free the Bears Fund

Colchester Zoo’s Action for the Wild has donated £31,000 in support of Free the Bears since 2011.

The majority of our support has been put towards enrichment and development at Free the Bears’ Cambodian bear sanctuary in Phnom Penh. In 2017, work continues on the renovation of the sanctuary’s oldest bear house and enclosure, originally built in 1997, including upgrading the night dens and replacing the roof. Rescues continue unabated, with the 202nd bear rescue arriving at the sanctuary on the 13th September 2017. After a long journey from Ratanakiri province, this female sun bear, weighing just 4kg, was bought in by the Wildlife Rapid Rescue Team. She had been kept as a pet and had poor skin condition, which can indicate an incorrect diet being fed previously. At time of rescue, she was estimated to be around 3 months old, which is far too young to be without her mother. But with two dedicated carers on a 24 hour watch and four hourly feeds, in her first two weeks the little female gained 2 kilos and settled in well.

Action for the Wild’s 2017 donation was put towards the creation of a new world-class wildlife sanctuary in Laos  that will allow Free the Bears to end bear bile farming in this country, whilst also supporting government-led efforts to curb the illegal wildlife trade. The new site is over 50 times larger than the existing centre at Tat Kuang Si, offering the opportunity to establish optimal standards for the animals that will soon call it home.

At the end of September, after many months of hard work, the first group of bears took their first steps outside and onto the new Luang Prabang Wildlife Sanctuary. Xaykeo, Ninh, Dinh, Civit Sabai and Laos Rescue 46 (nicknamed Pak) now have a beautiful new home to explore, together with two Laos Ambassador bears, Lom and Vieng. The new enclosure covers approximately 2,000m2, almost twice as big as the bears’ previous home, with two climbing towers, aerial walkways, pools, caves and lots of bear enrichment.

This is just the first step on a long road to create a world-class sanctuary for up to 150 rescued bears in Laos. Ultimately, this new sanctuary has the space to house each and every one of the 120+ bears currently trapped in bile farms across Laos. Much remains to be done to build further bear houses and forest enclosures, hire and train more staff for Bear Care Crews and build and equip veterinary clinics to treat the bears once they are rescued. The Quarantine Area within the new sanctuary will house all incoming bears whilst they undergo health checks, as many of the bears from the bile farms will have serious health concerns that will need addressing before they can venture into the great outdoors. The Quarantine Area will also house the bear cub nursery and animal hospital in the future, with the whole complex covering around 2,500m2.

The construction team have also been busy preparing for other species, as the Luang Prabang Wildlife Sanctuary will also provide a home for animals confiscated as part of wildlife law enforcement efforts. Already nine monkeys, a leopard cat and an Alexandrine parakeet wait to move into their new home. Whilst the focus of the new sanctuary will be overwhelmingly on the bears, options for the placement of rescued wildlife are limited in Laos and so the creation of a new sanctuary to serve the northern provinces will greatly aid the efforts of the Laos government to address the illegal wildlife trade.

Bear rescues also continue in Laos, with Bear Rescue #49 arriving at the Tat Kuang Si Bear Rescue Centre on the 12th October 2017. After more than two years tucked away in a dark cage, the young female moon bear will begin a new life in Free the Bears’ care. After a short time to settle and check that she is not carrying any harmful diseases, she will get to meet others of her species and slowly be introduced to a far more natural environment than anything she has known for such a long, long time.