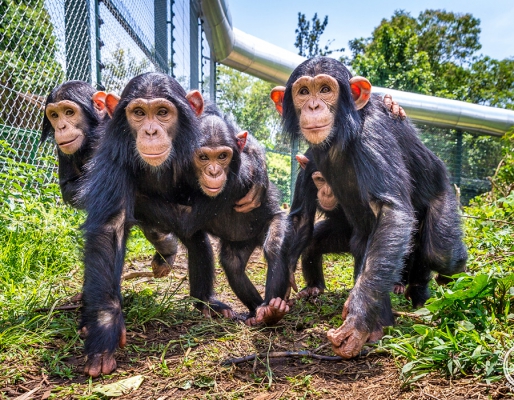 The Centre de Rehabilitation des Primates de Lwiro (CRPL) was founded in 2013 to offer a permanent solution for the increased number of orphaned great apes confiscated around Kahuzi-Biega National Park in the Democratic Republic of Congo.

Colchester Zoo’s Action for the Wild has supported the programme since 2013 and has donated over £24,600 to help enable the sanctuary to continue to receive confiscated animals, thus contributing to the enforcement of Congolese law by helping them to continue to receive primates intercepted from illegal trade.

Our 2017 donation was used to provide fresh fruit and vegetables for CRPL’s 173 primates for 10 weeks in the period April 2017 to June 2017. This funding also helps local communities, as the sanctuary buys all the food from local markets, injecting in the local community more than $3,000 per month. This helps the community to see the benefits of having the sanctuary in their village and increases their acceptance of conservation.

So far in 2017, the centre has finished several new constructions, developing new enclosures to improve the conditions of the primates in their care by providing them with semi-natural environments. In addition, during the first semester of this year, their education programme received more than 1,800 people, of which 96% were Congolese. As well as visitors to the sanctuary, the centre also educates Congolese militaries, instructing them about the important role they have in wildlife conservation. This is extremely significant as a large number of the militaries don’t know about their role in enforcing Congolese law and are implicated in several cases of wildlife trade.

Although the last two years have seen the largest number of arrivals at the sanctuary, data on the mode by which infants have arrived at the sanctuary also suggests the possibility that the increase in arrivals is at least partly due to increased awareness of CRPL and their effort to prevent the trade of live chimpanzees. For instance, a young female chimpanzee, Jina, was found by a Congolese man while the poachers were cooking her mother in front of her. The Congolese man felt sorry for her and bought the baby for around $10. He kept her in his house for a year, until he heard about the centre, and then personally contacted the Congolese authorities to bring Jina to CRPL. This case, together with the increased collaboration between Congolese authorities and locals NGOs, brings hope to CRPL’s work and the future of these species.