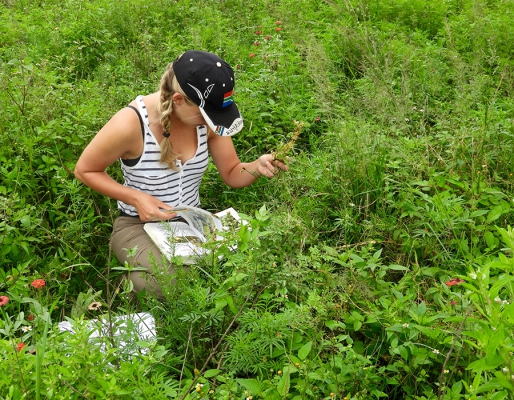 Research student Shareen Sauders talks of her time at UmPhafa and her study of the plant species in the area:

As part of my placement year at university, I am currently undertaking a three month internship at Umphafa Private Nature Reserve. The experience so far has been fantastic and has enabled me to gain a lot of skills and knowledge required to work in conservation; as well as reinforcing my drive to help conserve nature.

As part of this internship, I am also conducting my own research and collecting data which can later be used as part of my undergraduate dissertation project. This research involves data collection on the abundance of invasive and alien plant species in relation to disturbed areas. Through studying these invasive plants we will hopefully gain more insight about the different aspects that contribute to the formation of large invasive plant communities. The introduction of exotic plant species has caused many issues to biological systems for decades and has led to changes in community structures. Alien plants which thrive in new environments can out-compete endemic/native species for space and resources. This not only disrupts the natural environments that reserves such as the UmPhafa reserve are trying to conserve, but may also lead to the extinction of certain endemic plant species by competitive exclusion; which in turn leads to lower levels of biodiversity and reduced grazing for native animal herbivore species. This is particularly the case for problematic invasive plant species such as Common Lantana (Lantana camara) and Jimsonweed (Daturar ferox); not only do they both grow quite aggressively and replace indigenous plants, but are also highly toxic to herbivore species that feed off them.

Following this study, we will be able to better recognise areas that are susceptible to invasive plant immigration and be able to monitor these areas carefully to prevent invasive communities from forming.