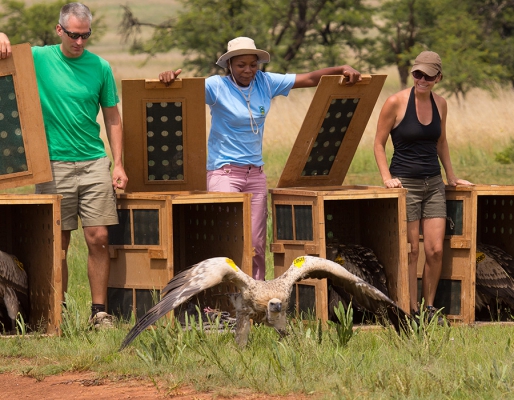 Colchester Zoo’s Action for the Wild has donated £11,000 to VulPro since 2015.  Our funds help towards vulture monitoring expenses, covering field staff and activities related to several of the core colonies. This also includes power line sweeps below the colonies.

The monitoring programme notes population changes of the Cape Vulture in a standardized way so that counts can be compared across colonies and time, and helps to identify and mitigate potential threats impacting vultures in the region.

There are three important elements of monitoring a Cape Vulture breeding colony: documenting its physical characteristics, estimating the number of breeding pairs, and estimating a number of demographic parameters, the most important of which is breeding success.

In 2017, colonies were first monitored in May-June to count the breeding pairs and to compare the number of pairs to previous years. From August- September, the nestling surveys commenced to count active nests, and then at the end of September into October, the third and last counts for 2017 commenced to record active nests with both fledglings and older nestlings.

As well as monitoring colonies, power lines are also surveyed. Power lines are one of the major threats that cause vulture populations to deteriorate rapidly, either by direct electrocutions or power line collisions. Colliding with these wires causes serious injuries, breaking wings and / or legs etc, resulting in many of these birds being permanently disabled. VulPro started power line surveys towards the end of 2014 for the purpose of building up a database to get accurate, representative information on vultures utilizing these structures and to estimate the mortality rates of vultures due to power line incidents. In addition, they are able to estimate hotspot areas in need of urgent mitigation in which to halt and reduce some of the mortalities and injuries surrounding breeding, roosting and feeding sites.

Ground surveys are done by walking below and along power lines, assessing each structure and collecting data relating to vulture and bird of prey usage. Over the past 3 years, there have been a number of power line surveys undertaken. A total of 7,635 kilometres in walking distance has been covered between October 2014 and May 2017, 440 structures of power lines surveyed, with a total of 36 vultures found dead on these lines either electrocuted or collisions.

We cannot expect the wild vulture populations to stabilize and/or increase with the rate we are losing them due to power line collisions and electrocutions jointly with all other threats. It is of utmost importance to work together in saving vulture species all over the world and make sure that the threats, which can be addressed, are done so sooner rather than later. Power line structures and cables can be made safer and this threat can be successfully addressed as long as conservationists and the electricity companies collaborate.