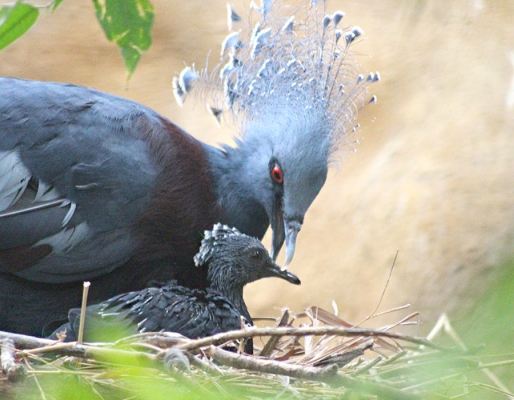 Almost a year after welcoming their last chick our breeding pair of Victoria crowned pigeons welcomed their 5th chick at the end of July.

The new arrival is sharing a home with mum Violet and dad Ozzy at their aviary by Penguin Shores and is currently spending its time in the nest. It won’t be long before this new arrival fledges the nest as they usually are strong enough to start exploring themselves at around 4 weeks old.

Victoria crowned pigeons are the largest pigeons in the world and are well known for their blue colouring and the spectacular crest of feathers on their heads. Chicks such as our new arrival are incubated by both parents for around 30 days so it won’t be long before it fledges to explore its home!

This species is listed as ‘near threatened’ on the IUCN redlist with the population facing threats such as habitat loss.

Stop by the family’s aviary and see if you can catch a glimpse of the newest arrival!