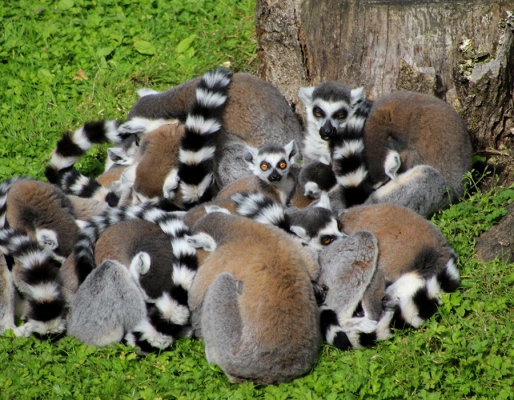 Back in April we announced the arrival of 6 ring-tailed lemur babies who have now been sexed and named by their keepers!

On the 2nd April mum Andro gave birth to the first of our new arrivals with a single offspring who has now been confirmed as female and has been named Kit Kat!

Kit Kat was closely followed by Lexi’s twins who were born on 3rd April, both are male and have been named Rolo and Buttons.

A few days later Alina gave birth to a single male offspring on 8thApril who is now called Aero.

Experienced mum and Grandmother Madison completed the baby boom with the birth of twins on 10th April 2017, one male named Oreo and a female name Ripple!

These tiny bundles of joy spent the first few weeks of their lives clinging to their mum’s underside, but as they are now nearly fully grown the youngsters now are enjoying spending their days playing and exploring their home.

See the group at just a few weeks old by watching the video below:

Ring-tailed lemurs such as ours come from Madagascar and are known for their distinctive long, bushy, black-and-white ringed tail. They are currently listed as near threatened on the IUCN red list.

Did you know!? The ring-tailed lemur gets its name from the Latin word for ‘ghost’ or ‘spirit’.

You can see our ring-tailed lemurs next to the Gelada baboons from the bridge over the lake or from the Lost Madagascar Express Road Train!