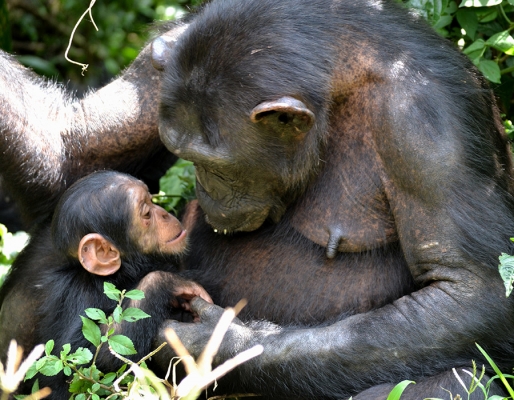 Action for the Wild continues to support primate sanctuary!

The Centre de Rehabilitation des Primates de Lwiro (CRPL) was established in 2002 in order to care for orphaned primates, providing them with a place for rehabilitation. As of April 2015, the centre is now home to 59 chimpanzees and 69 monkeys, representing more than eleven different species.

The CRPL is not only a safe place for orphans of poaching and the pet trade, but the primates have also become ambassadors, with more than 500 people visiting the centre each month to learn about primates and environmental conservation through awareness programmes.

In 2014, Colchester Zoo's charity Action for the Wild donated £4796 to help the centre to provide all animals in its care with a high standard of nutrition and medical care and to provide fresh fruit and vegetables for a period of 11 weeks at the end of the year. As well as helping the primates, the purchase of food also helps the local community, injecting more than $4.000 per month into the local economy. This helps the community to see the benefits of having the sanctuary in their village and increases the acceptance of conservation.

Action for the Wild contributed towards the weekly food purchases, such as potatoes, tomatoes, cabbages, beans, corn, onions, mangoes, avocados, sugar cane and bananas, as well as towards the different types of cereal grains that make the pap that completes the primate’s diet every night.

The CRPL has continued to receive confiscated animals and, during 2014, 3 primates arrived at Lwiro. In August, they received two chimpanzees from Kinshasa who were kept in a cage in a supermarket for two years; this pair have now been integrated into CRPL’s baby group, housed in a semi natural habitat where they can learn social and ecological skills, which will help them to survive in a future reintroduction into their natural habitat. In May, Bunyakiri, a red-tailed monkey also arrived. He was being kept by a rebel group in the province of South Kivu and has now been integrated with the red-tailed and mona monkey group.

Action for the Wild is pleased to be supporting this project again in 2015 and will provide a donation of £4,999.