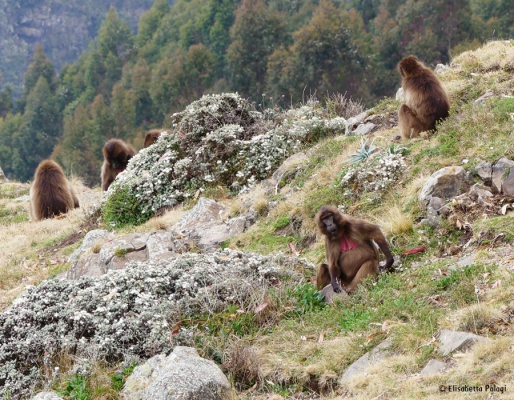 Gelada baboons are endemic to Ethiopia. The current status of wild populations isn’t known; hence the conservation status of this species needs to be properly assessed. In addition, nothing is known with respect to population structure, welfare condition and behaviour of geladas that live outside of protected areas and that are affected by severe human pressure.

According to the IUCN, the overall range of gelada baboons is being eroded as a result of agricultural expansion, due to the increasing human population densities on the central highlands. Deforestation and soil erosion are serious problems throughout the area. Grazing pressure is intense, and competition from domestic livestock has forced geladas to remain on the less productive gorge slopes in some areas. As a result the population has declined since the 1970s. The populations that are potentially isolated and that live outside the protected areas are the most vulnerable because they may be less capable of responding to and recovering from human‐related environmental threats.

The general objective of this project is to contribute to the improvement of the conservation of wild geladas in Ethiopia. This will be carried out by:

- increasing understanding of how human presence and activities impact on ecology and behaviour in two unprotected sites of Ankober and Debre Birhan, with different level of disturbance,
- increasing awareness of environmental issues, capacity building and ownership of the local community managing the areas frequented by wild geladas,
- increasing the scientific and technical knowledge of the species to be used for management purposes.

In March 2017, the Principal Investigators of the project (primatologists Elisabetta Palagi, Ivan Norscia and herpetologist Marco A. L. Zuffi) carried out a feasibility mission in the Debre Birhan area and in the Ankober area (Amhara region, Ethiopia). On the Kundi highland (a grazing land a few kilometres away from the Ankober village), they found a herd of geladas composed of two breeding bands, with a total of 123 individuals. In the area surrounding Kundi, other herds were detected and can be the object of a more comprehensive population survey. In the Debre Birhan area, the agricultural land, they detected a herd of a more than a hundred individuals frequenting agricultural lands. In this area, the animals are frequently chased away by humans and dogs during the planting and harvesting seasons. The two areas of Debre Birhan and Ankober are not protected and are exposed to different levels and types of disturbance (grazing versus agricultural lands, shepherds versus farmers using the lands, etc.).

The main research areas of this project will be to assess the historical background of how the gelada population has changed over the years by interviewing shepherds, farmers and other stakeholders and to assess the home range and spatial behaviour of the geladas in the different areas and look at the impact of human pressure on the population distribution. In addition, social behaviour analysis will be conducted, looking at aggression and conflict behaviour, competition over food, and play activities between juveniles as these "play units" represent the social bridge connecting subjects belonging to different one-male units.

The first data collection will commence in October 2018 and continue over a three year period. Action for the Wild has pledged €1,000 per year for the three year period and made its first donation in May 2018 to help improve the knowledge and ultimately conservation of this species in the wild.