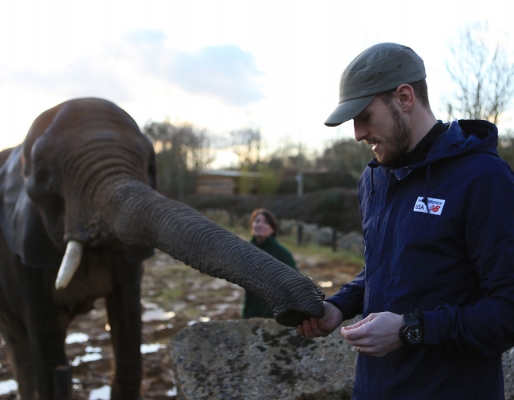 Aaron visited us as part of the ‘Footballers Lives’ series looking into the interest of players outside of the game.

As a keen conservationist Aaron stopped by to meet some of our keepers and more importantly some of our animals.
He was able to get up close to some of the most endangered species in the world and learn all about them and their fight against poaching, deforestation and other threats they face in the wild.

Rhinos are being slaughtered because people think their horns cure cancer, but it's a myth and we have to stop it. #FootballersLives

It's terrible that 100 elephants are killed for ivory every day. Here's what happened when I met some at Colchester Zoo #FootballersLives

Had a great time playing football with Tanya the elephant at Colchester Zoo - and she's good at it! #FootballersLives

Whilst here he also took some time out to feed our ring-tailed lemurs and meet head of conservation at Colchester Zoo, Rebecca Moore, to discuss the work of Colchester Zoo’s charity Action for the Wild and the fantastic projects we support.

I had a great time when I went in the Lemurs' den at Colchester Zoo - you just have to watch out when they sit on your head!! #FootballersLives

We hope Aaron enjoyed his time here at the zoo and that his interest in conservation continues to help raise awareness of the plight of endangered species in the wild.