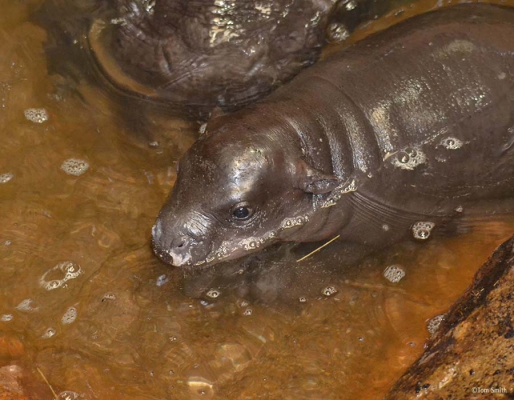 Colchester Zoo are very sad to report the passing of Yeni the Pygmy Hippo calf born on 22nd January at just over 5 weeks old.

On the morning of Tuesday 28th February keepers found Yeni, in an unresponsive state and witnessed Yeni’s mum Venus nudging her for movement.  Unfortunately, it became clear that Yeni had passed away at some stage in the early hours of the morning. Yeni was happily swimming in the pool with Venus just the day before and there were no unusual signs to suggest anything could possibly be wrong. A post mortem was carried out and results showed that Yeni had a compacted stomach, which unfortunately could not have been predicted by her keepers or treated even if she had shown any signs.

Pygmy hippo parents Venus and Freddie conceived naturally and Yeni was their third calf together. The pygmy hippopotamus is currently listed as endangered on the IUCN Red List so the birth of Yeni was excellent to assist their species, it is hoped that in the future Venus and Freddie will have another offspring.

Curator, Sarah Forsyth commented, “Yeni’s passing is a very sad lost to Colchester Zoo and her keepers are understandably distraught but are focusing on Venus to help her through this tough time. This is also a great loss for the EEP (European Endangered Species) breeding programme that Yeni was a part of.’

We have been overwhelmed with the condolences received following the tragic loss of our pygmy hippo calf Yeni. We would like thank you all for your support during this very sad time, although Yeni wasn't with us long the keepers had built a great relationship with her and she will always have a special place in our hearts here at Colchester Zoo.