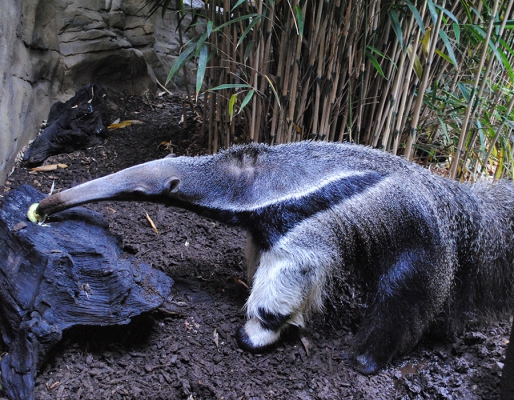 Colchester Zoo and its giant anteaters are very excited to be able to help a ground breaking project working to conserve the critically endangered Sunda pangolin in Southeast Asia. Sunda pangolins are one of the most illegally traded species on the planet; hunted and poached as live animals, but also for their meat and scales.

The project is working to train dogs for use in conservation to help locate the rare and elusive Sunda pangolin in the wild. Scat samples (poo!) from captive Sunda pangolin have been collected by Wildlife Reserves Singapore and have been sent over to a UK-based company, Ecology Dogs, for them to begin a trial to prove the concept that a dog can be trained to detect captive pangolin scat and then transfer that ability to detect the wild pangolin scat in the field.

Colchester Zoo has become involved as the programme needed scat samples from a range of different mammals, in this case our giant anteaters, on a similar diet to the captive pangolin in order to ensure the dogs can discriminate between the scents and only imprint on the pangolin scent.

The ultimate goal will be to train individuals working in range countries about the role of detection dogs in pangolin conservation in both enforcement and field work. The project is made possible by the work of the Wildlife Reserves Singapore, with support from the University of East Anglia and Ecology Dogs   It also has support from the IUCN SSC Pangolin Specialist Group and is recognised as a key project that needs to be developed in order to support pangolin conservation.

Colchester Zoo is very pleased to be able to support this exciting project.