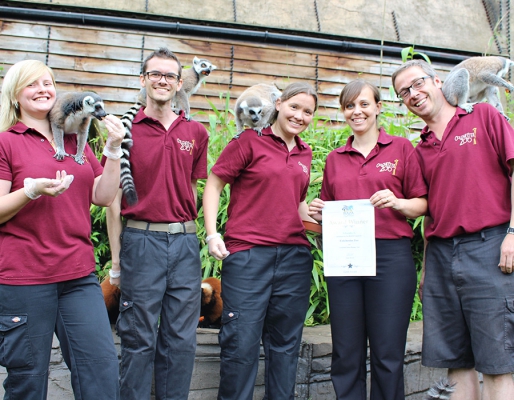 Colchester Zoo has been recognised for their work in Education at the British and Irish Association of Zoos and Aquariums 50th Anniversary awards ceremony.

The British and Irish Association of Zoos and Aquariums turns 50 this year and representatives from its membership came together to celebrate the past and consider future challenges at a major conference held at Marwell Wildlife, Hampshire, which ran from 6 to 8 June. Culminating in a gala dinner and awards ceremony on Wednesday evening, Colchester Zoo was recognised for their contributions to Education.

Over 15,000 people took part in Colchester Zoo’s UmPhafa trail over the 2015 Summer Holidays. Visitors were prepped for their adventure in our base camp tent and then set out armed with all the tools they would need to track leopards. Using magnifying glasses and measuring devices, the intrepid rangers looked for tracks, poo and leopard kills to help them identify whether the elusive predators were found on the ‘reserve’. Their adventure on our mini reserve mirrored the work we do in South Africa at UmPhafa, our 6,000 hectare nature reserve. After many years of land rehabilitation and careful management of the species found on the reserve, leopards have returned to UmPhafa and we now have five animals regularly seen on our camera traps.

Andy Moore, Learning Manager at Colchester Zoo, said “This project was immense fun for the team to create and deliver, and evaluation showed us that visitors immersed themselves in the authentic South African habitat we built for them. We are delighted to receive the BIAZA Gold Award for Education and are busy working to offer more innovative and exciting activities for the upcoming summer holidays”.

Dr Kirsten Pullen, Director of BIAZA, said, “The standard of award submissions was incredibly high this year and I’m delighted that Colchester Zoo has achieved a Gold award for their UmPhafa Game Ranger Trail.”

“As we celebrate 50 years of ‘Working Together for Wildlife’ we have an opportunity to reflect on the incredibly important work we do in conservation and the significant contributions our members make in educating the public about our natural world and inspiring them to protect it. The zoo and aquarium community has come an incredibly long way since the Association came into being, but we must continuously strive to improve. This event has provided us with an opportunity to bring our members together to remind ourselves of how far we have come and re-inforce our commitment to animal welfare, conservation, education and scientific research.”

Originally known as The Federation of Zoological Gardens of Britain and Ireland, BIAZA was formed in 1966 out of recognition of the need for standardised principles and practices in animal management. Made up initially of just nine zoos and bird gardens, the Association has grown over the past 50 years and today its113 strong membership have become a powerful force for conservation and education, with continuous scientific research and sharing of best practice to ensure the highest levels of animal welfare.