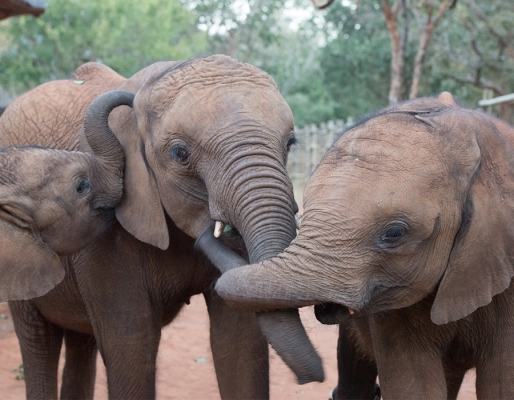 July has bought some exciting developments with Action for the Wild’s support elephant project. At the end of the  month, the younger orphans in the Kafue Release Facility (KRF) had a close encounter with a wild bull elephant during their daily walk. Maramba and Rufunsa were ahead of the group together with their keepers. Without taking any notice of the keepers, the bull moved towards the two orphans and started touching and smelling them. Rufunsa and Maramba were scared and rumbled loudly. They quickly moved towards the rest of the orphan herd behind them. By now the bull had noticed the humans and started to move away. Interactions like this one are very important for the orphaned elephants. Any bonds they are able to make with wild elephants will help their integration into the wild elephant population in the area.

The herd of release-phase orphans at the facility has now grown to four, with Batoka (age seven) and Kafue (age six) joining ten-year-old Chodoba and nine-year-old Chamilandu. These two males have left the younger orphans to travel with Chodoba. They show no signs of wanting to rejoin the younger orphans as female Chamilandu has previously done. For the past month, this group of four has settled close to a river with plenty of browse, not too far from the Release Facility. Recently they paid an unexpected return visit and spent a morning socialising with the younger orphans before resuming their excursions in the wild.