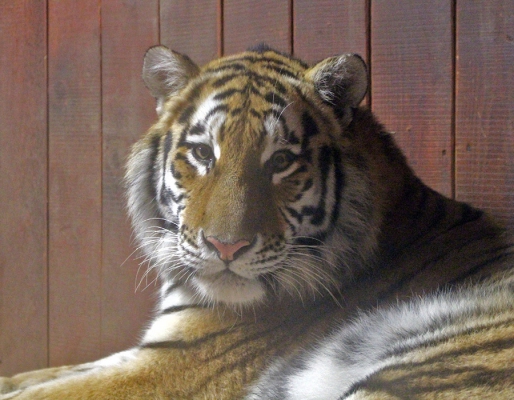 Our new resident Tiger is named Taiga, she is nearly 2 years old and has come from Kristiansand, Norway. It is by coincidence that Taiga has moved into her new home at Colchester Zoo, known as ‘Tiger Taiga’.  The word ‘taiga’ is an alternative name for the boreal forests where this species live.

Amur tigers come from the Amur Region along the eastern border between China and Russia with their habitat containing some of the coldest areas in the world.

Colchester Zoo is already home to two Amur tigers, Igor our male and Anoushka another female.  Taiga will spend some time settling into her new home before gradually being introduced to our resident male tiger. It is hoped that in the future Igor and Taiga will become a breeding pair which is very exciting for Colchester Zoo as we have not been able to breed this species before due to Anoushka being a hybrid.

Amur Tigers are also known as Siberian Tigers and are the largest and palest of all tiger subspecies; they are currently listed as endangered on the IUCN Red list.

Photo of a young Taiga provided by ©Dyreparken