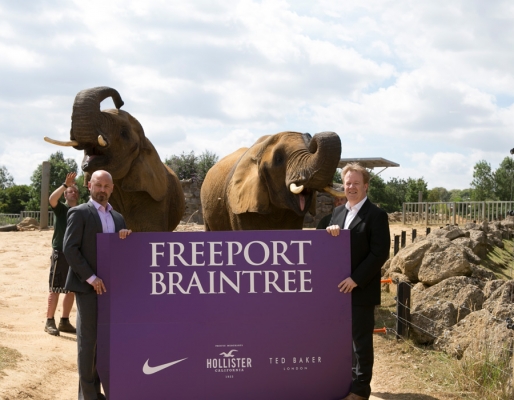 Freeport Braintree, the Essex-based outlet Centre, has engaged with Colchester Zoo, as sponsors of its prestigious Elephant Kingdom.

Here at the zoo, Elephant Kingdom houses four adult African Elephants - three females and one male - we also support an elephant orphanage project in Zambia, through our charity Action for the Wild.

Female elephants Tanya and Zola, were rescued from Africa in 1985 and have been at Colchester Zoo ever since. Opal and bull elephant, Tembo, joined us in 1998, to begin a breeding programme at the zoo. Tembo and Tanya successfully bred twice, in 2002 and in 2004.

Freeport Braintree will work closely with us on a series of interactive events at the shopping centre to highlight the plight of elephants in Africa, plus promoting the support which we are giving to the Elephant Orpahange Project, through Action for the Wild.

The Elephant Orphanage Project's mission is to rescue, rehabilitate and release orphaned elephants into protected reserves, the elephants they look after have become orphans due to the illegal ivory trade. Their goal is to provide a refuge for calves abandoned mostly as a result of poaching and human elephant conflict.

Freeport Braintree recently collaborated with us here at Colchester Zoo to celebrate 'The Year of the Bear' when the bear trailer travelled to Freeport on Sunday 15th June. The road trip invited shoppers to learn about "Free the Bears" a project supported by Action for the Wild, which works to raise awareness of the threats that bears face in the wild.

Josef O' Sullivan, Centre Manager at Freeport Braintree, said: "We are extremely delighted to have teamed up with Colchester Zoo and proud to be sponsoring the Elephant Kingdom.

"We will be running a series of elephant-themed events at Freeport Braintree over the next 12 months, where we will also be collecting money for Action for the Wild. We're confident that our shoppers and the wider community will get behind this important initiative and show their support, not only for these beautiful animals, but for Colchester Zoo also."

The unique concept of Elephant Kingdom allows the animals the maximum sight, sound and physical contact and has specially designed night stalls, a roped off "safe area" and spacious indoor bull elephant quarters. It comprises large outdoor paddocks where the elephants have access to a waterfall and pool area.

Alex Downing, Development Director here at Colchester Zoo, said: "We are delighted to have the support of Freeport Braintree. Our aim is to continue to raise awareness of the situation endangered species face and we hope that this new partnership will help more people realise the significance of our breeding programmes."

Set in a relaxing village environment, Freeport Braintree offers an escape from the stresses of city shopping. With 1,500+ free car parking spaces available for all Freeport Braintree shoppers, there are unbeatable bargains with stores offering up to 60% off RRP every day.

For more information on Freeport Braintree, please log on to www.freeport-braintree.com.