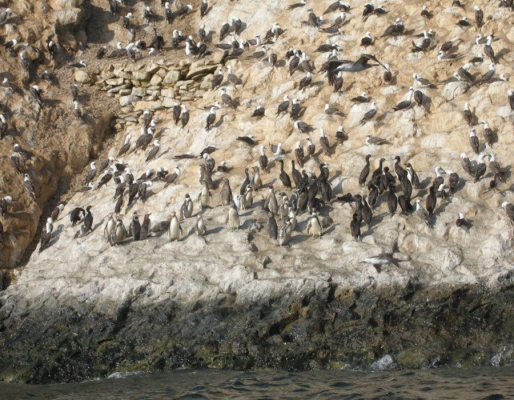 Action for the Wild has been supporting the Punta San Juan Penguin Project since 2006, donating a total of £15,664 to date. In September 2015, we will make an additional donation of £1,525, which will be used to assist with the organisation’s comprehensive census count of Humboldt penguins in 2016; necessary to monitor population trends in the future.

Census count data has shown that overall the population in Peru is stable at the moment.  Census counts are conducted at the start of the year, covering over 900 miles in search of penguin groups. Sites in 2014 yielded mixed results, with almost 5,000 birds counted at one site, which normally averages 1,000-1,500 birds, whereas another site only had two birds, whereas in 2013 almost 600 birds were counted there. It is thought that this site was too disturbed in 2014 for the birds to return, due to humans accessing the area and high numbers of sea lions, which may have prevented the birds from accessing the cave area to breed. The main goal for 2015 was to thoroughly survey sites from the furthest site north, in addition to censusing the key known sites south of Lima. This included 12 new sites that were added. The team has now documented most of the entire Peruvian Humboldt range on 45 island and coastal sites. Sadly many of the sites for which there are counts across the years showed a significantly lower number of penguins in 2015 compared to 2014. These mixed results show that the species faces an uncertain future due to human interference with their habitat, as well as climatic effects and predation.

Census counts have been combined with a health assessment of penguins at Punta San Juan, which is typically Peru’s largest population. To date, approximately one-fifth of the Punta San Juan population has been evaluated. Thankfully analysis of skin, blood, feather and tissue samples has not shown anything unusual.

Project partners have also developed protocols for sustainable guano harvests. Guano (bird excrement) provides a soft substrate for penguin nesting burrows. Unsustainable harvest of guano for use in fertiliser affects the breeding of penguins. In recent years, sustainable harvest protocols have been developed, which has reduced the direct harvest impact from a 10 percent penguin population loss to zero.

The project’s mission  has now expanded to include programmes aimed at protecting all the species that call Punta San Juan home, such as the Guanay cormorant, Peruvian pelicans, and

South American fur seals and sea lions, and to develop a strategic plan for the sustainable management and oversight of the reserve and for the management of other marine protected areas in Peru and elsewhere.