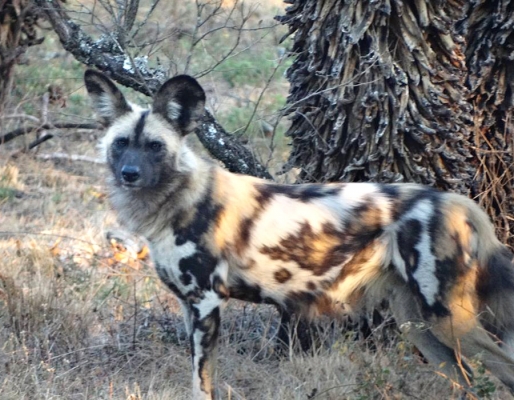 We had been waiting for this for day for what seemed like an eternity. Many months of hard work had finally paid off. They were here!

On the 4th of July as the sun was setting over the reserve 7 female African Wild Dogs were released in to a Boma on UmPhafa Private Nature Reserve and a few weeks later they were joined by a number of male dogs in an attempt to form packs which can be released pack into the wild. It has since been proven that the mixing has been a success! With 5 of the dogs bonding well enough to be moved to a new home and form their own back. Although we are sad to see them leave the UmPhafa reserve it is hoped that this group may be able to help give the survival of the species a better chance.

The remaining dogs have also continued to do well with the males and females mixing well with tails wagging! It is hoped they will be released into the wild over the coming weeks and become a second successful breeding group.

African Wild dogs are classed as critically endangered. There is no category after this but extinction.  Over the year this species like many other African Species have had it pretty tough meaning that their numbers have been reduced to such an extent that their overall existence is now down to the hard work and dedication of charities such as our own Action for the Wild and the Endangered Wildlife Trust. The logistics involved in ensuring these animals are kept in existence is incredibly complex but we have received very good feedback from Endangered Wildlife Trust with regards to the quality of the Boma. They consider it to be of exceptional standard in comparison to other bomas and have also given good feedback with regards to the care, monitoring and individual knowledge of the animals. The cold mornings, the late evenings are all worth it knowing that eventually these beautiful animals will be moving to a home where they will once again be free roaming around huge expanses and hunting in the African Bush. TWe feel incredibly honoured to play our role in this.

Africa is a harsh continent. It is currently going through a crisis with regards to its biggest asset, its Wildlife.  We must make a stand for these animals and do everything humanly possible to ensure their survival. It is not only the Wild Dogs that need our help. It is the Elephants, the lions, the Rhino’s, the Gorilla’s the list is endless. To have let this continent become what it is today is a very sad day indeed. With yet another record year with regards to rhino poaching we need to do more. We need to see these animals for what they are, the value that they have by just being here, by just being alive. They ARE Africa!

To date this will be the largest collaborative conservation project that UmPhafa has been involved in and will be hugely beneficial to the future survival of the species in the wild.

To find out more about the UmPhafa Private Nature Reserve please click here.