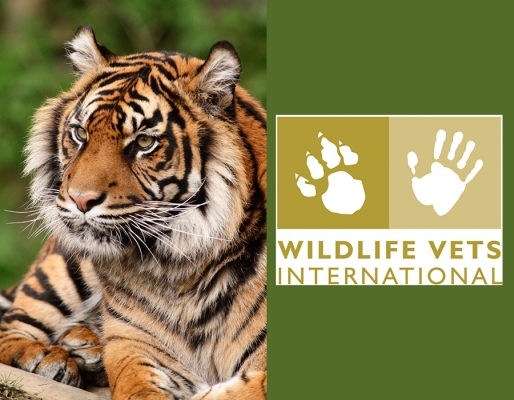 In 2014, Action for the Wild provided a £5,000 donation to Wildlife Vets International to assist them with their investigation into disease risks of Sumatran tigers. Dr John Lewis of Wildlife Vets International has been working with the Sumatran Tiger Health Forum (STHF) to develop such investigations and also attended a Vaccines for Conservation workshop at the start of 2015 to further look into the disease risks of endangered species.

This workshop concentrated on one particularly prevalent disease, canine distemper virus, which poses a threat to the conservation of increasingly fragmented populations of threatened carnivores. Alongside affecting domestic species, the virus has been causing disease and mortality in a wide range of wildlife species, including tigers and lions. Scientists have been looking into vaccinations to protect at-risk wild carnivore populations, including Amur tigers and leopards, which have long been supported by Action for the Wild.

In 2010, canine distemper virus was diagnosed in tigers that died in widely separated locations across the Amur tiger range. The virus contributed to the decline of one well-studied sub-population, which went from 38 individuals to 9 between the years 2007 and 2012 and it has been suggested that populations consisting of 25 individuals are 1.65 times more likely to disappear in the next 50 years if the virus is present. That finding is profoundly disturbing for wild tigers, given that in most sites where wild tigers persist they are limited to populations of less than 25 breeding adults.

The most logical approach for protecting threatened carnivores from canine distemper virus may be to target the vaccine on the endangered species itself. Scientists are now concentrating on developing existing vaccines, developing rapid diagnostic kits, improving disease surveillance in the field, sharing health data among experts and developing new vaccine technologies.

Action for the Wild’s supported Sumatran tiger work sits within the work plan that came out of the Vaccines for Conservation workshop. The suspicion that canine distemper virus may be causing disease in wild Sumatran tigers is what led to the establishment of the STHF, in order to study emerging diseases in wild Sumatran tigers across the island. Our support of Wildlife Vets International enables them to provide technical support and assistance to STHF in its formative years and, following on from Dr John Lewis’ visit to Indonesia in April, it is clear that progress towards re-establishing an active Sumatran tiger disease surveillance framework in Indonesia is now underway.