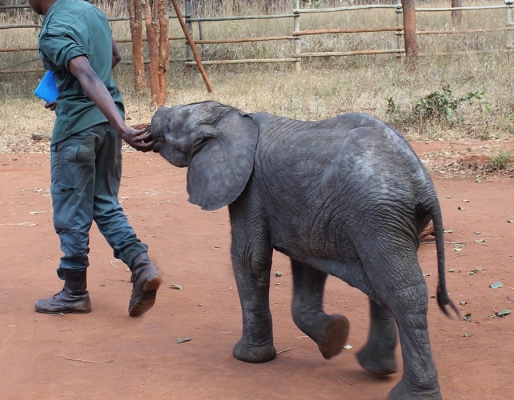 Action for the Wild has supported the Elephant Orphanage Project (EOP) since 2010, having donated over £47,500 to date. The GRI-Elephant Orphanage Project (EOP) is a project of Game Rangers International (GRI) established in 2008 with the Department of National Parks and Wildlife, with the mission to rescue, rehabilitate and release orphaned elephants back into the wild.

Currently EOP cares for four milk-drinking orphans at the Nursery, ten milk-weaned orphans at the Release Facility who are feeding independently, but still require the security of the boma overnight, two Release Phase elephants who come and go to the facility to join their surrogate siblings as and when they choose and two orphans who have only recently graduated to the Kafue Release Facility, but who have currently attached to a wild herd and so currently are classified as in the Release Phase as they have not returned to the facility since they left.

On the 12th June, The Department of National Parks and Wildlife responded to an orphaned elephant alert in Livingstone and quickly captured the six-month-old calf. She was stabilized before being flown to the Nursery in Lusaka. She is currently known as #43 (being the 43rd elephant assisted by the EOP in the last 10 years). Whilst she appeared strong at point of rescue it was apparent she had been away from her mother for sometime as she was showing signs of malnutrition and her blood test results evidenced she was not in 100% health. Since then, she is getting stronger as a result of the around the clock care from her keepers and brings the nursery herd to four individuals.

On the 6th June, two of the Release Facility orphans, Njanji and Kakaro, followed Chamilandu (the Release Stage 4 matriarch) on an excursion with a local wild elephant herd and then decided not to return with her, instead they remained with the wild herd. The team successfully tracked the wild herd, and Njanji and Kakaro were seen with them two days later. Due to the aggression then demonstrated by matriarch, the team backed away as she took her herd and the orphans deep into the forest. The team are still focusing a lot of effort and manpower on locating the two orphans to ensure their health, welfare and integration with wild elephants.

During April, May and June, Release Stage 4 orphans, Chamilandu and Batoka, stayed together and continued to explore the bush and thickets around the Release Facility. Spending only 11 days inside the boma at night, Chamilandu and Batoka usually joined the orphan herd early in the morning for the bush walk into the Ngoma Forest and across the Chintumba Plains. Most nights they moved deep inside the Ngoma Forest. In total, Chamilandu and Batoka covered 792 and 713 km respectively. On the night of 14th April, they travelled about 5 km out of the camp moving North-West beyond the Mopane Woodlands into an area they usually don’t visit, which suggests that they could have been in the company of wild elephants. In addition, in the past year, the incidence of wild elephant and orphan herd interactions has significantly increased with the oldest female Chamilandu at 12 years old having been witnessed being mounted by a wild bull.

Click here to read more information on the Elephant Orphanage Project and how Action for the Wild supports it.