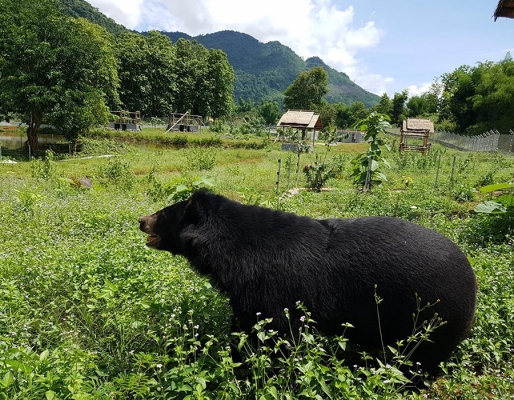 For the past two years, Action for the Wild has been helping to support the work of Free the Bears in Laos PDR, with their new Luang Prabang Wildlife Sanctuary.

Since 2003, 58 bears (57 moon and 1 sun bear) have been rescued in Laos, with 9 of these bears having been rescued since November 2017.  With awareness of the new sanctuary spreading, Provincial Forest Inspection offices are increasingly calling on Free the Bears to provide short or long-term housing for other species of rescued wildlife.

In its first full year of operation, the Luang Prabang Wildlife Sanctuary has provided a safe and secure home for the rehabilitation of four species of primate (Stump-tailed macaque, Northern pig-tailed macaque, Assamese macaque and Rhesus macaque), small carnivores (Leopard cat, Masked palm civet, Common palm civet and Red panda), birds (Alexandrine parakeet, Asian barred owlet and Oriental scops owl) and reptiles (Impressed tortoises). In total, over 40 individuals of 15 species, many of which are listed on the IUCN Red List, have been provided with a second chance at life thanks to the creation of this much-needed sanctuary. Since November 2017 alone, 6 red pandas, a common palm civet, macaques of various species, a leopard cat and a pygmy slow loris have been rescued, again highlighting the Laos government’s efforts in increasing its capacity to combat the illegal wildlife trade.

With such an influx of confiscations, work has continued at a fast pace to develop the sanctuary as quickly as possible, and it is expected such development will continue until 2020, so that eventually 130 bears can be cared for across 21 enclosures.

Bear enclosure 1 was completed last September and is today home to 7 adult moon bears who are able to enjoy 24-hour access to a large and enriched habitat. In June 2018, bears were moved into the new enclosure 2; an 8,000m2 enclosure surrounding a large lake where the bears can romp and fish, together with a wide range of climbing frames, caves and platforms to allow the bears to exhibit a full range of natural behaviours. This shuffling has enabled over 30 bears to have their facilities upgraded, and aims to make space for five new bears expected to arrive in July. The outdoor enclosures have been completed in advance of the associated Bear House 2, which will ultimately comprise of 10 dens (set within two wings) and 4 adjoining enclosures covering almost 1.5hectares.

A new Cub Nursery and the Quarantine House, to which Action for the Wild donated funds in March 2018, are partially complete. The large Quarantine Area (QA) features a dedicated entrance building for biosecurity, and a large 400m2 holding area with individual dens for up to eight newly rescued bears, plus two outdoor play pens. Work on the holding area has been delayed due to the necessity to provide emergency housing for red pandas since January 2018, but will recommence soon and the area is already suitable for short-term housing of bears in temporary conditions. Eventually this QA will house further separate buildings for additional species such as primates, reptiles, birds and small mammals.

In 2018, Free the Bears have additional plans for a 3rd bear house, a wildlife hospital, pangolarium/reptile pre-release facility and Small Carnivore Conservation Centre. They have just started work on the Small Carnivore area which will allow them to move the red pandas out of the QA and finally complete this ready for new arrivals. As one of the most illegally trafficked mammals in the world, pangolins are seized from illegal wildlife traders with increasing regularity in Laos. The need for a specialist facility in which these animals can be kept for short-term rehabilitation prior to their re-release back to the wild is therefore essential, and funding has been secured for this building – which will also serve to house reptiles such as turtles and snakes – making construction of this facility a priority project for 2018-19.

With the Laos Prime Minister’s order expressly prohibiting trafficking, trade and farming of any CITES Appendix 1 species, laying the foundations for closure of the existing bile farms, work needs to continue at a fast past to provide a home for the 125 bears known to be held captive in up to eight bear bile farms and extraction facilities across Laos.