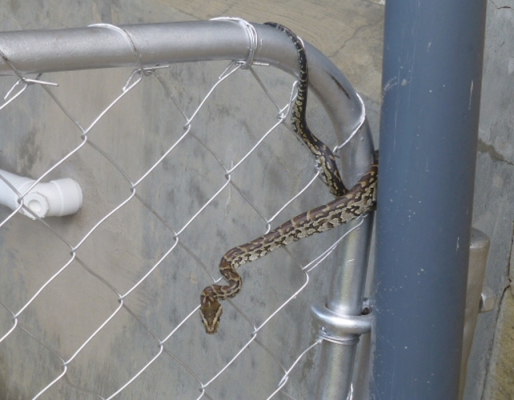 This young African Rock Python was found on a neighbours farm to Colchester Zoo's UmPhafa Reserve. Our staff went to the property to remove it for the safety of the reserve. Pythons are a rare sighting, they are a highly protected species in South Africa being Africa's longest snake they can grow up to 6m! Pythons reproduce in the spring and can lay up to 20 eggs, their incubation period is around 90 days. Hatchlings can be up to 60cm and it has recently been discovered that mothers will stay with their hatchlings for up to two weeks to protect them from predators – this is an unusual behaviour which is not often seen in reptiles.

Sadly pythons are hunted for their skin and meat and are often killed by local people who have a general fear of snakes. Habitat destruction is also having a dramatic effect on their population.

Did you know!? Pythons are a constrictor which means they kill their prey via constriction.