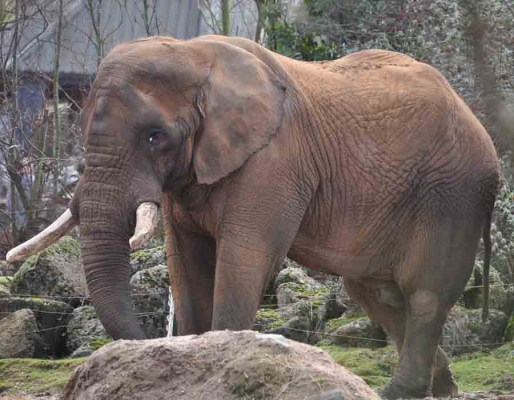 On Thursday 28th February Tembo the African bull elephant at Colchester Zoo underwent a ground-breaking procedure performed by some of the top veterinary and dental professionals from the UK who have undertaken animal veterinary procedures worldwide.

Unfortunately, Tembo had an abscess on the right side of his jaw; initially the cause of the infection was unclear but following veterinary investigation it was suspected that the infection originated from the molar tooth sat directly above the location of the abscess.

The keepers have a very strong bond and have a mutual respect between themselves and the elephants. Each morning the keepers ensure that the elephants have a routine health check and it was during one of these health checks that they identified Tembo’s abscess.

Following the identification of the abscess, for the health and welfare of Tembo, plans were then drawn-up to perform a full dental examination under general anaesthetic. This decision was not taken lightly but as direct observations of the suspected infected tooth under normal conditions could not identify any damage to the tooth the only viable option was to anesthetise Tembo to allow the veterinary and dental teams to properly assess the problem.

The examination was completed and it was confirmed Tembo did indeed have an infected lower molar with four defects in this tooth with each deficit leading from the grinding surface of the tooth to the tooth root and this has resulted in the abscess developing on the jaw. It was clear from the examination that antibiotic therapies would not alleviate the problem; ultimately, a dental procedure involving root canal fillings would be needed. Whilst veterinarians were reviewing the best action to take next, Tembo has been allowing his keepers to keep the infected area as free from dirt and debris as possible with twice daily oral treatments involving flushing the area. This aids topical applications to temporarily ease the condition.

After much thought and discussion amongst professionals, it was decided that the best action to take for Tembo, with his health and welfare in mind, was a ground-breaking dental procedure which had not been undertaken before. This was to be performed under general anaesthetic to involve removal of the infected material in the tooth. To complete this, each of the four holes will need drilling out and once clean, a resin compound will be used to fill the holes but with a different type of material to that used in human dentistry. This tooth, despite the damage and resulting infection is not at the point of being shed and potentially has another 7 or more years of use before being replaced by the next tooth in line, besides that the jaw is possibly a greater worry.

This was an extremely complex piece of surgery, in part due to the sheer size of Tembo, weighing around 5 tonnes, but also access for the drilling equipment and for the dentist to be able to operate. Prior to the surgery, the level of infection in the jaw was unknown, however the vet couldnt find any notable problem with the jaw, we’ll know more in a few months if problems continue.

There was also the added complication that this specific type of surgery has not been attempted before and pioneering surgery is significantly more challenging due to limiting factors in our knowledge All the staff involved recognise that to do nothing was not an option for Tembo and therefore all those caring for Tembo agreed that to perform the surgery was the only decision that could be reached. The team at Colchester Zoo and the medical professionals entered into this process with a high degree of positivity and with the hope for Tembo making a full and lasting recovery.

We are delighted to report that the surgery went well and Tembo came out of the anaesthetic smoothly, he will remain in his indoor area for a few days following the procedure until the keepers are happy he is ready to go out into the paddock.

We will need to allow Tembo at least a couple of months post-surgery to evaluate any response from this procedure but all are hopeful that all went well. Full recovery from this level of procedure could take up to 1 year and a half to heal due to the damaged bone of the jaw requiring removal, leaving a large deficit which has to heal naturally.

Tembo, arrived at Colchester Zoo in March 1998 along with Opal, one of our three elephant cows, as part of a breeding programme to assist with the conservation of their species. Since living at Colchester Zoo Tembo has sired 2 calves, Kito in 2002 & Jambo in 2004. Tembo has also contributed to the African elephant breeding programme as a semen donor and via artificial insemination in Vienna and a calf was born. This calf named 'Abu' is now the breeding bull at Zoo Halle in Germany. Unfortunately, in 2017, Kito passed away at Dvur Kralove Zoo in the Czech Republic. Tembo's only living decedents are now Abu and Jambo who lives at Valencia Zoo in Spain.

Tembo’s dedicated keepers and the medical professionals will be monitoring Tembo closely over the next few months and we will keep you informed with his progress.