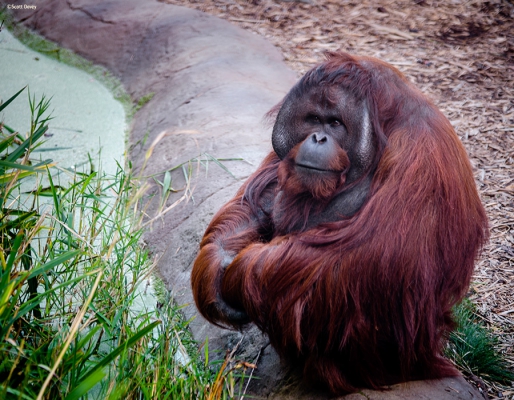 This year Colchester Zoo is raising awareness of the plight of great apes in the wild through our ‘Going Ape for Conservation’ campaign. Raising awareness of the issues these species face in the wild is now more important than ever as the Bornean orangutan has recently been moved from Endangered to Critically Endangered – joining the Sumatran Orangutans in the highest risk category the IUCN (International Union for Conservation of Nature) assigns.

Bornean orangutan populations are declining as the forests they live in are being turned into palm oil, rubber or paper plantations and others are killed by humans.

“As orangutans are hunted and pushed out of their habitats, losses to this slow-breeding species are enormous and will be extremely difficult to reverse.” says Erik Meijaard, one of the assessors of the species, member of the IUCN SSC Primate Specialist Group and director of Borneo Futures – an initiative dedicated to preserving Borneo’s biodiversity.

A full update of the IUCN Red List, including new assessments of other species, will be announced at the IUCN World Conservation Congress 2016 in Hawaii in September.

You can find out more about the work being done to help this species by checking out Colchester Zoo’s charity, Action for the Wild and the projects it supports.