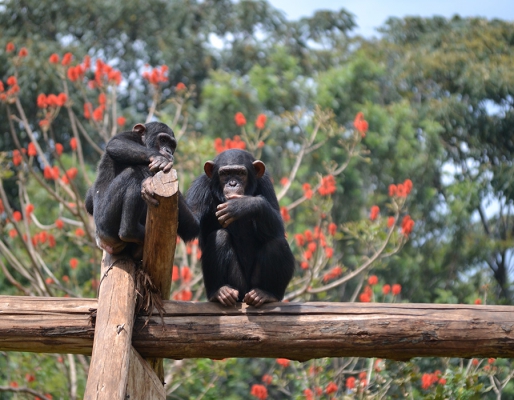 Colchester Zoo’s Action for the Wild has supported the Centre de Rehábilitation des Primates de Lwiro (CRPL) in the province of South Kivu, Democratic Republic of Congo (DRC) since 2013. To date, we have donated £19,724 and, in March 2017, made another donation of £4,955.30.

It is estimated that the DRC contains 93% of the population of Eastern Chimpanzee, making it the most important country for the conservation of this sub-species. The CRPL is situated only four kilometres from the Kahuzi-Biega National Park. Managed by the Congolese Institute for Nature Conservation (ICCN), the national park is listed at the 3rd most important site worldwide for conservation of the Eastern Chimpanzee by the IUCN.

The ICCN, together with the Centre de Recherche en Sciences Naturelles (CRSN), founded CRPL in 2002 during the second war of DRC, due to the increasing number of orphaned chimpanzees and other primates found in the area. The Centre is meant to be a transit place for these animals, giving them the opportunity to live in a safe semi-natural environment and to learn the skills necessary to survive in their natural habitat.

The Centre de Rehabilitation des Primates de Lwiro (CRPL) is a Pan African Sanctuary Alliance accredited primate sanctuary for chimpanzees and monkeys and forms part of the Conservation Action Plan for Gorillas and Chimpanzees of the Eastern Congo. As the only sanctuary in the DRC accepting chimpanzees and monkeys, support of the CRPL is vital to working towards conservation of primates within this country.

In 2016 alone, CRPL rescued 10 chimpanzees and 17 monkeys, meaning by the end of the year, CRPL was home to 73 chimpanzees and 92 monkeys from over 11 different species. Action for the Wild’s current donation will be used to provide  10 week’s worth of fresh and dry food for the primates in their care, in order for CRPL to continue to provide all animals with a high standard of nutrition.

CRPL is a vital support to ensure the application of international (CITES) and national laws against illegal wildlife trade, particularly the bush meat and pet trade, and is a key step in the process due to the Government’s need for a place to deposit the confiscated animals. The support to CRPL assures the continuity of the reception of confiscated animals and the guarantee that these animals will receive the necessary attention.