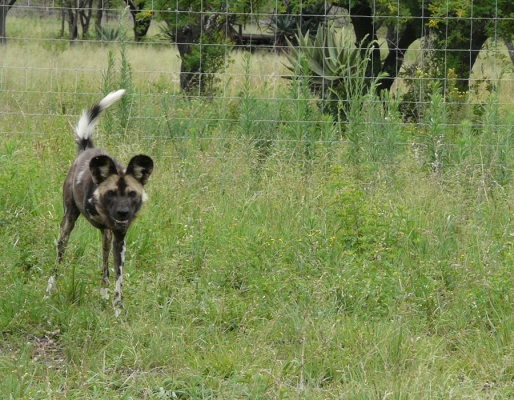 With the larger pack of wild dogs from Colchester Zoo's UmPhafa Reserve having moved on to their permanant home on another reserve our project has become a lot smaller with just the care of the two sisters remaining. These dogs are much quieter now that the other dogs have been removed, which would be expected. They also seem a lot more relaxed with the three legged female being more confident in approaching the feeding area during feeds.

It wasn’t within our plan to have extra dogs but these two ladies have a special story.

Belonging to a pack of Wild dogs in the Hluhluwi and Umfulozi National Park they had started to stray of the main reserve. Although captured and moved back on a number of occasions it was sadly their downfall. The final escape lead to one of the females getting caught in a snare. Snares are set up to catch various different types of game. They are usually made up of a basic piece of cable wire and cause tremendous pain to the animals caught in them and usually ends up being fatal.

Fortunately the female caught in the snare was found in time. Her leg had been very badly damaged and after initial thoughts that maybe it could be saved this was not the case and her leg was completely amputated. When we got the call to ask if we could take them we were initially hesitant. Two extra mouths to feed would put extra pressure on us with regards to hunting for food. But again our hearts ruled our heads. The injured animal arrived with her sister. Although she was in perfect health she would be company for the injured female and would hopefully help her recovery. We were advised to watch them closely and to make sure that the injured female was given plenty of food. We were concerned that her sister would try to steal the food away but how wrong we were. The recovery that this young female has shown has been remarkable. Although she hops around she is fast and has improved from week to week often now trying and many times being successful in stealing her sister’s food away.

We are currently unsure of what lies ahead for these two females. It is hoped that they can be bonded with a pair of male Wild dogs. The big question is will our little lady be able to hold her own back in the wild. From what we have seen this is a great possibility and we can only hope that this will be the case.