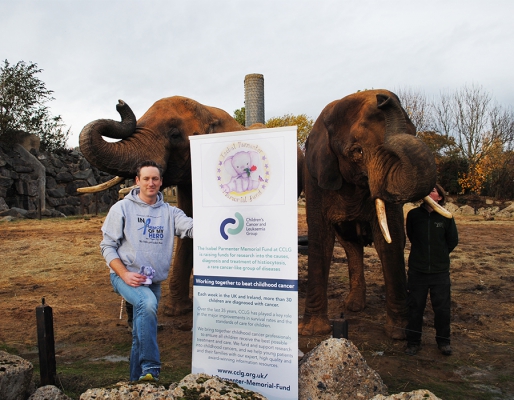 My name is Michael Parmenter and I am an extremely lucky man. I am the daddy to a very special little Angel, my daughter Isobel, and I would like you to read my story about the reasons why I need your much needed sponsorship.

Isobel was a beautiful, bright and cheeky little girl with the biggest brown eyes and a smile to match. She had an infectious laugh and lit the room up wherever she went. Isobel adored Peppa Pig and idolised Mr Tumble. She loved painting pictures and most importantly, stickering everything with her thousands of stickers. Her favourite animal was Elephants or “hufty’s” as she knew them as. Shortly after her first birthday, Isobel started to show signs of being sick. It was nothing out of the ordinary to begin with but then she rapidly deteriorated. She was admitted to hospital in March 2014 and from then on, my wife’s life, my life and more importantly, Isobel’s life, was changed forever. Isobel was transferred to a specialist unit where she endured so many horrendous tests for a 15 month old little girl. These ranged from numerous blood tests, endoscopies, colonoscopies, biopsies, x-rays, ultra sound scans and MRI scans. She ended up having to have a Nasal Gastric Tube to help provide her with much needed nourishment as she was unable to eat and eventually P.I.C. lines and a Hickman Line to help with all the medication, blood and platelet transfusions she required on a daily basis. Throughout this time, Isobel’s spirit never faltered and she continued each day with determined strength, a huge amount of courage and with a smile on her face. She was inspirational!

In August 2014, my wife and I were dealt the horrific blow of being informed Isobel had a rare cancer called Langerhans Cell Histiocytosis (LCH). Words fail to describe how my wife and I felt at being delivered this news. You don’t ever expect to hear those words as a parent, you think it happens to other people’s kids not yours. Things then became a whirlwind of various further tests and investigations to establish just how much this disease had spread. It was an incredibly hard, very scary and highly emotional time for us as a family but Isobel still continued to display such bravery and her cheekiness and lust for life carried us through the dark times, of which there were many. In the end Isobel was found to have LCH present in her gastric tract, skin, ears, liver, spleen and bone marrow and she was started on chemotherapy straight away. It was at this time that Isobel started collecting beads as part of the Beads of Courage scheme in hospital where she received a bead for every time she had medication or a procedure carried out. In that short time, Isobel received 1,314 beads!

Unfortunately the first two cycles of chemotherapy did not work and so she had to commence salvage chemotherapy. My wife and I were told that there was a chance Isobel would not make it but we wanted to give our little girl every chance to beat and survive this horrible disease. If anyone could do it, Isobel could! Unfortunately, Isobel picked up an infection and deteriorated rapidly which meant she had to be transferred to Paediatric Intensive Care. In the afternoon of the 5th October 2014, Isobel was placed on a ventilator. It was then that my wife and I had to make the worst decision ever of our lives, to turn off the ventilator. Isobel passed away that evening in her mummy’s arms with myself holding her hand aged only 22 months old. Heaven gained the most beautiful Angel that day. It was just over 10 months since she had started showing signs of being sick to losing her and we couldn’t believe how quick this disease had taken Isobel from us. The 5th October will forever be the worst day of our lives and no parent should ever have to experience the pain of losing their precious child.

LCH is a chronic disease. It is estimated 1 in 200,000 children become ill with LCH each year but it can affect adults too. Doctors and scientists do not know what causes LCH as it is not hereditary and it is not infectious and is currently treated with chemotherapy, radiation, steroids and in some cases, a bone marrow transplant. Most patients with LCH will survive but some may develop long-term side effects such as diabetes insipidus, stunted growth, bone defects, hearing loss, or neurological problems. The diagnosis is currently made by a specific tissue biopsy and prognosis depends on the extent of the disease and the types of organs affected. It is believed to be under-diagnosed as some patients may have no symptoms at all while others may have symptoms which are mistaken for other more common conditions.

My wife and I are determined that we will not let our grief for Isobel destroy us and it’s hugely important to us that Isobel’s memory lives on. Colchester Zoo agreed for us to dedicate their new Butterfly Glade exhibit to Isobel which thousands of visitors now enjoy every day. We decided to channel our energy into something positive and started fundraising in Isobel’s memory which began in January 2015. We have made it our mission to spread much needed awareness about his disease amongst the public and health professionals and to raise much needed funds into vital research. We had never heard of this disease before and if by fundraising it saved one other person’s life, then Isobel’s legacy and our mission would have been fulfilled. During this time we have held numerous charity events and we are lucky enough to be supported by some wonderful friends and family who have undertaken some gruelling personal challenges, all inspired by Isobel. Due to our hard work and determination in fundraising, we were awarded the Pride of Essex Highly Commended Community Champions Award 2015 of which we are very proud of. As of November 2016, with the help and loyal support of our lovely friends, family and our supporters, I can proudly say we have raised just over £33,000.00 for HistioUK, the Children’s Cancer and Leukaemia Group and other Cancer related charities. In December 2015, we set up the Isobel Parmenter Memorial Fund, a special named fund which is part of the charity the Children’s Cancer and Leukaemia Group (CCLG). All the funds we raise through this fund go towards research into LCH as we hope one day there will be a simple test to diagnose it and a guaranteed cure for this vile disease. Which leads me to why I now need your support more than ever.

As part of the Parmenters fundraising efforts Michael successfully summited Mount Kilimanjaro on the 28th September, in memory of daughter Isobel with her knitted "hufty", raising funds for her memorial fund for research into the disease Langerhans cell Histiocytosis. For further information, Michael's trekking diary and lots of photos of his time on Kilimanjaro, please visit the Isobel Parmenter Memorial Fund Facebook page. If anyone wishes to sponsor him please visit http://uk.virginmoneygiving.com/MichaelParmenter