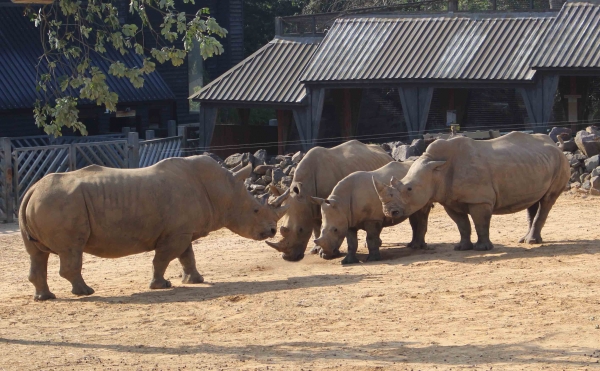 On the 25th June 2018 Colchester Zoo was delighted to welcome back an old friend! Otto the male rhino returned to us after being away for over a year at another park. The purpose of this move was a recommendation from the studbook keeper to see if he would mate with the female rhinos at Woburn Safari Park whilst our female was then pregnant.

His keepers were extremely pleased to see him back home and as he settled in so well it wasn’t long before it was time to introduce him to his son Kifaru, our female Astrid who arrived whilst Otto was away and re-introduce him to Emily the mother of Kifaru.

Otto was very interested in Kifaru and did try getting up close to him during their first meeting, however mum Emily and Astrid were keen to protect young Kifaru! Otto was also very intrigued by Astrid and Emily, getting up close to them and being quite vocal. This is a good sign from our breeding male and we’re looking forward to seeing what the future will bring for our crash!

Did you know that White rhinoceros such as Otto are currently listed as near threatened on the IUCN red list. This is why it is so important for breeding such as this to take place.

See Otto’s arrival in the video below:

Why not stop by Kingdom of the Wild and see our White rhinos.