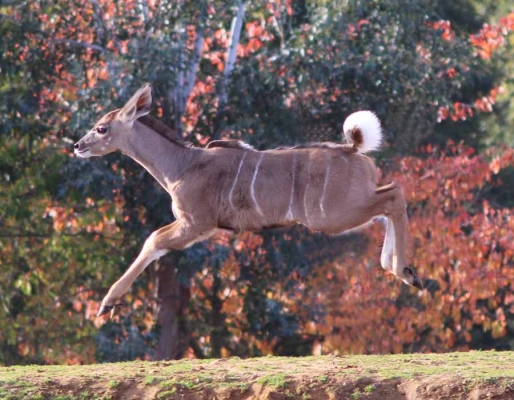 Our kudu calf has a spring in his step!

In August we announced that our female Greater kudu Nakia gave birth to a healthy calf! Nakia hadn’t been at Colchester Zoo for very long and so she was pregnant before she arrived here with us.

Nakia is a first-time mum and has been very attentive to the new calf who is doing extremely well. We can also now confirm that the calf is male and his keepers have since named him Ericsson or ‘Eric’ for short! Eric has been spending more time out in the main paddock with his mum and has recently been getting to know his neighbours the rhinos, giraffes, zebras and ostriches who he shares his home with.

The male Greater kudu is more recognisable than the female by their spectacular spiral horns, which can reach over a metre in length! Eric’s horns will start to grow between the age of 6-12 months but it will take a few years before they grow to an impressive size.

The Greater kudu is a very sociable animal and so we hope to see Eric continue to mingle with his new friends and neighbours over the coming weeks.

Why not stop by our Kingdom of the Wild and see if you can spot our new calf!