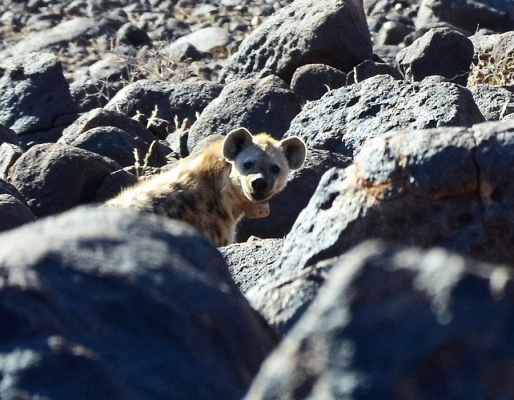 In July 2017, Action for the Wild made another donation to our supported project the N/a’an ku sê Research Programme in Namibia, bringing the total donated to date to £24,209 since our support began in 2012.

Namibia is one of only a few African countries that supports six species of large carnivores in free-ranging environments. Considering the extensive scale and number of livestock production properties, conflict between farming interests and large carnivores is inevitable. As a consequence, land managers routinely persecute species such as cheetah, leopard, African wild dog and hyena to prevent or halt livestock losses.

Action for the Wild’s funds have been used to contribute towards field research to help protect the large carnivores, such as researching livestock protection strategies and undertaking conflict mitigation as well as purchasing radio collars.

In January 2016, our funds were put to use on a collar for a brown hyena on a farm 60km west of Otjiwarongo, Namibia. This brown hyena was a suspected livestock killer, which can often lead to persecution by farmers. Brown hyenas are primarily scavengers and can cover long distances in order to find food. On occasion brown hyenas are known to kill smaller animals, especially if they are weak or injured – including lambs and calves. This therefore gives brown hyenas the potential to be a problem animal. Our brown hyena, Eddy, was collared in a bid to prevent his lethal persecution and to prove whether or not he was a true problem animal. Through the GPS data gathered by our collar, researchers were able to ascertain he was not a livestock killer. Throughout the collaring period daily GPS coordinate updates were sent to the local farmers to act not only as an early warning system to move livestock if Eddy came too close, but also to engage farmers in the method of proving whether carnivores are problem animals or not. Through the collaring period, tolerance from the farmers significantly increased towards Eddy. Without collaring Eddy, the farmer would have most certainly killed him, but instead, by the end of the collaring period, all the farmers were deeply interested in his movements and behaviour.

The N/a’an ku sê Foundation’s spotted hyena research project, initiated in 2016, aims to collect vital data on the ecology (population density, clan structure, prey preference and home range) of spotted hyenas in arid areas. In June 2017, the team successfully collared the project’s first spotted hyena in Kanaan, using a collar purchased by Action for the Wild. The collared hyena is a male around 2.5 - 3 years old, weighing 48 kg. The team performed a full health check, collected biological samples and took measurements. The spotted hyena’s GPS collar will now provide the researchers with precious data regarding the clan movements and home range, as well as important data on livestock predation. By studying the hyenas’ movements and correlating it to the losses reported by farmers in the area, the researchers will be able to determine the actual level of conflict versus the perceived level of conflict, in the hope of reducing indiscriminate persecutions towards spotted hyenas in the area. This is the first time a spotted hyena has been collared in this area and the data collected will be invaluable to the ongoing research project.