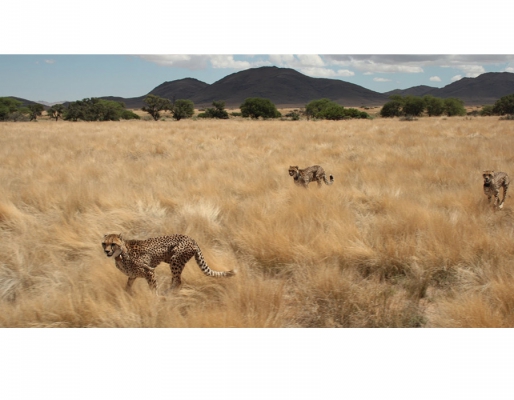 Since 2012, Colchester Zoo’s Action for the Wild has donated over £24,000 to support the human-wildlife conflict work of the N/a’an ku sê Research Programme in Namibia.

Of the two calls in April, one was of a weak cheetah cub caught wondering around a farm and the second was from a farmer who had caught a leopard  in a capture cage. The leopard was captured because the farmer suspected the animal to be responsible for his livestock losses. In May, the Rapid Response Unit received seven human-carnivore conflict calls. Of the seven calls, six reported leopard conflicts and one reported spotted hyena conflict. Two of the calls were requests for advice and five calls reported carnivores in capture cages. In June, the Rapid Response Unit received ten human-carnivore conflict calls. Of the ten calls, two reported lion conflict, four reported leopard conflict, two reported cheetah conflict, one reported spotted hyena conflict, one reported wild dog conflict and one caracal conflict. Almost half of the calls requested advice and six calls reported carnivores captured in cages.

In some instances, the farmers agree to collar and release the carnivores back onto their farms. For instance, on the 5th June 2017, the team received a call from a farmer who had caught a female leopard in a capture cage. The farmer wanted to collar and release the leopard on his farm to monitor the animal and prove whether she was a problem animal. The team went on site and anesthetised the animal but, once sedated, found that the leopard was too young to be collared. Young leopards cannot be collared because the collar will suffocate the leopard as it grows. The team explained that due to her size, it was unlikely that she is the culprit of any livestock losses. The farmer agreed to release the leopard on site, which is a true success. This farmer has more than 700 cattle and places his calves in his kraal until they are about three months. The farmer works hard to co-exist with carnivores on his land and has not killed a single predator in the last four years.

In other instances, the farmer wants the carnivore removed from his farm if he expects it of causing livestock losses. On 23 May 2017, the team received a conflict call from a farmer reporting a leopard in a capture cage. This leopard was suspected of being a problem animal, however, the farmer had no proof that it was. Despite the team’s best efforts, the farmer did not want to risk releasing a potential problem animal back on his farm so the leopard was therefore translocated to a protected area close to Windhoek.

These problem animals are moved to other safe areas almost straight away, such as a female leopard captured at the end of May that was released into Namib Naukluft National Park on the 2 June 2017, or alternatively the carnivores are released after a period of care, such as a juvenile leopard which was cared for at the N/a’an ku sê Foundation Wildlife Sanctuary for 18 months, as she was too young to be translocated and was eventually released in April 2017.

As of the end of June, the team is currently tracking eight carnivores fitted with GPS collars (two male leopards, five female leopards and one male cheetah) and continues to share the data with the farmers involved, thus building relationships and mitigating human-carnivore conflict. The data points from these GPS collars are shared with the farmers in the area to allow for close monitoring. As well as responding to conflict calls, the N/a’an ku sê Research Programme also conducts other research programmes. At the end of June, the hyena study team managed to dart and collar a spotted hyena from the north clan using a collared purchased with Colchester Zoo’s Action for the Wild funds. The GPS movement data of this individual will provide the team with more exact spatial ecology and territorial ranges of the spotted hyena in the south Namib landscape.