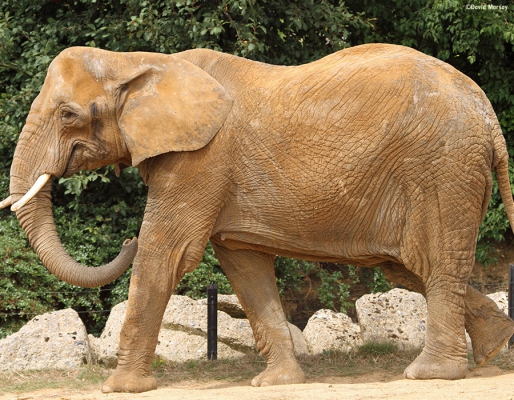 Amanda’s Jumbo Drive to Save the Elephants

On Saturday 2nd July, Amanda Butler and her husband, Barry Butler, from West Swindon arrived at Colchester Zoo to start a drive which saw them cover a distance of over 1,000 miles by car, over three days as they visited one elephant named pub or restaurant to represent every 1,000 elephant killed illegally each year.

The money that they raise will go towards DSWF’s Elephant Orphanage Project in Zambia which provides round the clock care for young elephant
orphans and prepares them for their eventual journey back into the wild.

Amanda and Barry called at 35 different ‘watering holes’ to equal the 35,000 elephants that lost their life to poachers and illegal trading of ivory. They did not make their journey alone as they took Jambo, a metre high model elephant, with them to make sure they were noticed. The decision to start their journey at Colchester Zoo was due to Colchester Zoo’s charitable arm, Action for the Wild, which has supported the Elephant Orphanage Project in Zambia since 2010 and has since donated £35,000 to help the EOP in their mission to rescue, rehabilitate and release orphaned elephants back into the wild. These donations have specifically been put towards food and veterinary costs for the milk-drinking orphans following their rescue.

Amanda, who is a passionate conservationist and an ambassador for DSWF says “What started as an interest 2 years ago has become a passion. I truly believe the future of our planet is in our hands. It is our co-existence with all living creatures that keeps the world in balance. We need to do something now, before it’s too late. As an ambassador for DSWF I can engage, encourage and excite other people’s passion.”

“Every year our Wildlife Warrior fundraising volunteers and ambassadors play a critical role in raising much-needed funds to support our conservation projects in Africa and Asia working to protect some of the world’s most endangered and iconic animals,” said DSWF CEO Sally Case. “We are immensely grateful to Amanda, Barry and all our fundraisers for committing their energy and time on behalf of the charity.”

Amanda and Barry are aiming to raise £2,000 and you can support them by visiting their fundraising page at http://uk.virginmoneygiving.com/Jumbodrive2016

The David Shepherd Wildlife Foundation (DSWF) is a non-profit organisation funding key projects in Africa and Asia working to save critically endangered animals in the wild. Founded in 1981 by wildlife artist and conservationist, David Shepherd CBE, the charity works to fight wildlife crime and protect precious wildlife populations by engaging with local people to nurture long-term, sustainable solutions to human-animal conflicts.