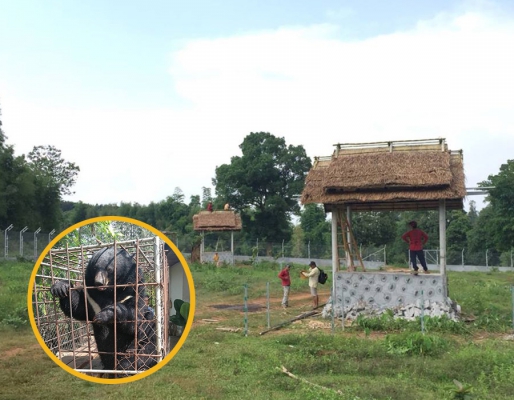 Throughout 2018, bear rescues in Laos have continued. In early March, we reported on the rescue of Laos bears 54 and 55. On Good Friday, the team rescued four bears;  a sun bear in Cambodia (rescue number 204) and three moon bears in Laos (rescue numbers 56, 57 and 58). This month, May, they have also been asked to undertake an emergency rescue of five (maybe more) moon bears from Xayaboury province.

On a very positive note, Free the Bears have received incredible news from Laos!  The Prime Minister has signed an order prohibiting all trafficking, trade & farming of CITES Appendix 1 species.  This should see a complete ban on any extraction or exploitation of bile farm bears. This is very exciting news and should lead to bile farm closures very soon.

With the increasing rescues and the closure of bile farms, Free the Bears are rushing to finish Bear Enclosure 2  and the Quarantine House at Luang Prabang Wildlife Sanctuary, allowing them to move bears and free up some space. Very soon one group of bears will enjoy romping & fishing in this 8,500m2 slice of paradise. By creating one new enclosure, they will be able to provide enclosure upgrades for 30 bears and create room for the new bears they are hoping to rescue later this month.

Colchester Zoo’s Action for the Wild has donated £36,000 to Free the Bears since 2011, with our most recent donation of £5,000 in March 2018 going towards this essential construction of the quarantine house to ensure Free the Bears can continue accepting bears in need, without risking transmission of disease to the growing bear family in their care.