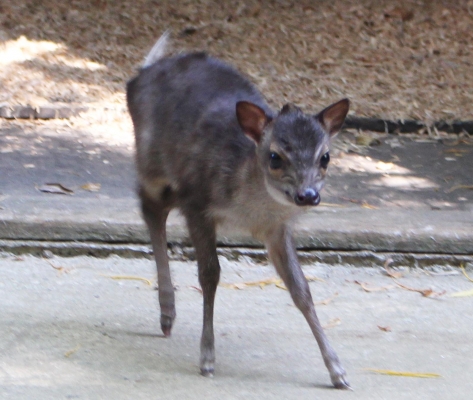 Blue Duiker calf is a girl!

On the 16th June we saw the birth of a Blue duiker calf. Mum Jasmine has been very attentive to the new calf over the last few months and is healthy and strong. We can now confirm that our calf is female and her keepers have called her Penelope.

The Blue duiker shares her home alongside their neighbours the Blue cranes who they live with.

The name “duiker” comes from an Afrikaans word meaning “diver”, and they are true to their name as they’re instinct is to diving undercover when disturbed or feel threatened by a predator! The blue duiker is monogamous, with pairs appearing to mate for life.

The blue duiker is Classified as Least Concern (LC) on the IUCN Red List but they are heavily hunted for bushmeat.

Why not stop by the Edge of Africa and see if you can catch a glimpse of the new arrival!