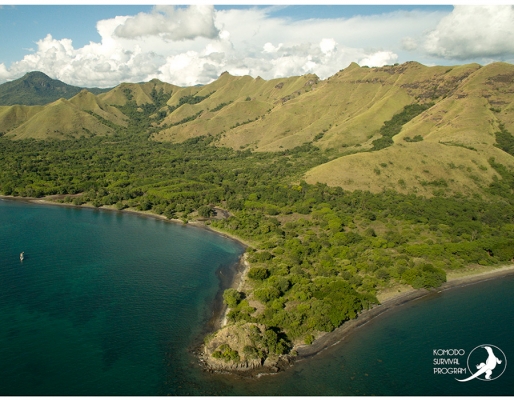 On Flores, Komodo dragons are protected on four nature reserves located on the western and northern coast of the island. Here, conservation efforts are conducted by the NGO Komodo Survival Program, thanks to continued support from members and associates of the European Association of Zoos and Aquaria (EAZA), including Colchester Zoo’s Action for the Wild.

The conservation project is implemented in the Wae Wuul nature reserve, off the eastern boundaries of Komodo National Park in western Flores, in the three contiguous conservation areas of Wolo Tadho, Riung and Tujuh belas pulau and in the district of Pota in northern Flores. The northern coast of Flores constitutes the easternmost known stronghold of Komodo dragons in Indonesia and harbour a genetically diverse lizard population in a region still void of mass tourism.

The 2017 Flores programme for Komodo dragon conservation successfully implemented a number of key wildlife management and sustainable development initiatives. The second session of a three-year comprehensive survey on the current distribution of Komodo dragon along the entire coastal area of the island of Flores was conducted. Between February and September 2017, presence/absence of Komodo dragons was assessed by positioning wildlife monitoring passive infrared cameras in coastal dry deciduous Monsoon forest and savannah habitats. The survey included 95 camera trapping stations located along the coastal area of western Flores from the Wae Wuul nature reserve to the south coast of Flores Island. The cameras successfully recorded images of Komodo dragons at 42 (44%) out of 95 camera trap locations positioned along approximately 180 km of coastline. In Wae Wuul nature reserve, 14 camera traps successfully recorded Komodo dragon presence from a total of 27 camera trap stations.

Population monitoring by means of passive infrared cameras recorded a relatively stable trend of both Komodo dragons and their main prey species, including Timor deer, wild pigs and water buffalo, while providing training to rangers and technical staff of the Indonesian Department of Forestry.

Patrolling and surveillance of nature reserves on the western and northern coast of Flores revealed new threats to the reserve’s integrity and local wildlife. Patrolling and surveillance included the involvement of a task force made of 10 people of the local villagers living close to the nature reserves. Patrolling activities consisted of regular hiking along established trails in the Wae Wuul and Tujuh belas pulau nature reserves to spot and prevent bushfires, illegal hunting of ungulate prey species and wood harvesting.  No illegal wood harvests were reported, however, a number of wild fires were recorded and later extinguished in Wae Wuul. Poaching of Komodo dragon prey species will need to be tackled with an even stronger involvement of local people in the protection of natural habitats and law enforcement policy.

The sentry post of the Wae Wuul reserve was inoperable and in state of disrepair from 2006 to 2007. In 2008, thanks to EAZA support, rehabilitation works of the building were initiated including new roofing, floor, repair of cracked and damaged walls, new windows, upgrade of electric wiring and power. A hut was also constructed to house a new generator. In 2012, the water supply system was restored. The structure now consists of three bedrooms, a large hall/meeting room, a kitchen and a bathroom. The post is an important base for operation to conduct monitoring and conservation activities in the Wae Wuul reserve. Community awareness and patrolling activities, field training on wildlife monitoring and all other logistics depend upon good functioning of the post infrastructures. In 2017, restoration work was carried out as basic maintenance of the roof, windows, walls and front porch.

Community awareness initiatives were conducted in northern Flores. Sessions were attended by approximately 50 villagers in Nanga Mbaur and 25 villagers in Nanga Mese, including religious leaders, village chiefs and community members. The main aim of the initiative was to reiterate the importance of sustainable use of natural habitats and commitment of national and international sponsors in sustainable development programs. The programme emphasized the importance of minimizing levels of encroachment to monsoon forest and savannah habitat and the beneficial, long-term effect of preventing intensive poaching on Komodo monitor prey species.

The awareness programme also included courses on elementary English for adults and primary and secondary school children. Seminars were also conducted with educational activities related to Komodo dragon conservation, including lectures, story-telling and documentaries. The heads of the villages were also present during classes. Results showed that students’ knowledge on Komodo dragon ecology and conservation significantly improved after classes.

A course on ecotourism was also conducted. The course aimed at developing locals’ ability to organise and conduct ecotourism services including environmental awareness, planning tours, walks and treks, plant and animal interpretation. The second edition of a handicraft training workshop gave people from northern Flores the opportunity to meet Komodo village craftsmen and learn about the making of wooden Komodo dragon characters for the tourist market. This is one of the key capacity building initiatives of the programme. Wood carving activity, based on sustainable or strictly monitored wood harvesting, is one remunerative activity for people living within the boundaries of Komodo National Park and it is the plan to create a similar sustainable activity in northern Flores.

A meeting was held at the Indonesian Ministry of Forestry and Environment in Bogor to review the work conducted in 2016/2017 and present the 2018 schedule of activities. Moreover, the cooperation agreement with the Indonesian Department of Forestry for conducting monitoring and conservation activities of Komodo dragons was renewed for the period 2016-2021, which is a key achievement as it will enable the Komodo Survival Program to continue to assist wildlife and habitat protection in both western and northern Flores.