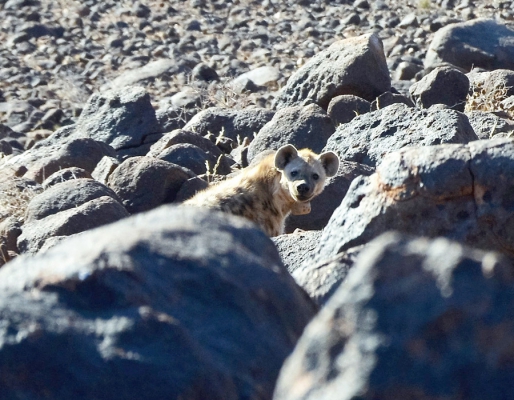 Action for the Wild is pleased to be supporting the N/a’an ku sê Foundation again in 2018, pledging £4,936, which will bring our total support to £29,145 since 2012. Our past donations have been put to use by the N/a’an ku sê Rapid Response Unit and research teams helping to purchase collars for tracked animals, such as cheetah, leopard and spotted hyena, or purchase valuable research equipment.

Between September 2017 and February 2018, the Rapid Response Unit received 27 conflict calls. The majority of the calls concerned leopards, although other conflict situations involving cheetah, brown hyena, caracal, genet, baboon and African wild dogs were reported. On occasion, the carnivores have been captured and, where willing, the farmers have released them back on site with or without a collar, however sadly, on occasion, the farmers will shoot the carnivore before the Rapid Response team can intervene. This is not the ideal situation, as it does not solve a potential conflict situation, as, due to the spatial and social behaviour of leopards, another leopard will invariably move in to take over the vacant territory.

Some farmers are willing to collar a carnivore and monitor its movements on their farmland. If the carnivore then comes close to their livestock, they can implement better protection measures until the carnivore moves on. The Rapid Response Unit at N/a’an ku sê is continuing its daily routine of updating farmers about one cheetah and four leopards who are currently GPS collared. In addition to the daily farmer updates about the collared carnivores, the Rapid Response Unit has been on the road conducting farmer outreach. The unit covered close to 2,000 km during February 2018, travelling back and forth to conduct outreach, training, and to initiate a new population density and ecological survey at a new site focussing on leopard, cheetah, and spotted hyaena conflict that the farmers have been experiencing within the conservancy.

Action for the Wild’s funds have also been used to purchase a radio collar for a spotted hyena male, Mbembe. Since the start of the spotted hyaena study in July 2016, the research team have identified 17 individual spotted hyaenas and their movements in the area belonging either to two family clans, or being nomadic males through the use of motion-sensor cameras. They have also recorded and mapped out 24 confirmed kill and 13 confirmed scavenge sites from the local spotted hyaenas, and cross referenced it to the estimated densities of the main prey species in the area.

In January 2018, the team designed and built a ‘hyaena-exclusion’ kraal (overnight pen) using only materials available on most farms. The idea is to prove that reinforcing existing kraals, or even building new ones, with a proven hyaena safe design, can effectively reduce livestock losses to spotted hyaena depredation without costly livestock guarding. A kraal was built at the end of January using only old fencing materials and designed based on observed spotted hyaena behaviour. The first two trial nights proved that the north clan could not access the enticing bait within. In February 2018, the testing of the ‘hyaena proof’ kraal continued with several designs including using thorn branches along the base, and shade netting to mask visual cues and determine the hyaenas’ reaction to the different deterrents. The tests have thus far proven that, although spotted hyaenas are tenacious and determined, once they learn that they cannot get into the kraal, their attempts become shorter and less frequent, thus proving the kraal’s effectiveness. A meeting was held with several stakeholders to explain the conflict mitigation work and findings; a positive first step in working with the south farming community.