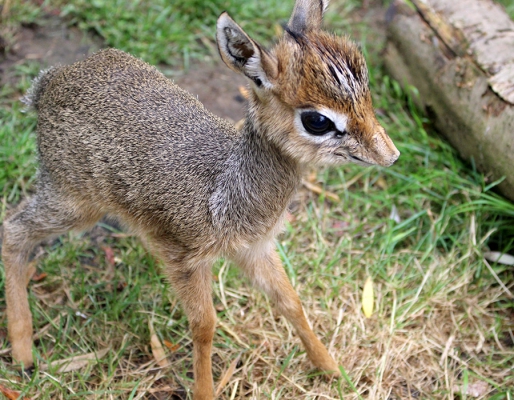 On the 20th June Kirk’s dik-dik Daenerys gave birth to a healthy calf after successfully breeding with male dik-dik Demetri. Unfortunately, Daenerys wasn’t taking to motherhood so the calf was not receiving the care and attention she needed, therefore the difficult decision was made to hand rear the young calf to give her the best chance of survival.

Since being born, the new arrival has been closely monitored by her keepers and we’re pleased to report that she is being very receptive and feeding well so it is hoped she will continue to thrive. Keepers have chosen to name the calf 'Dakarai' meaning happiness/Joy in African.

The Kirk’s dik-dik is one of the smallest members of the antelope family measuring a maximum of just 45cm high with a maximum body length of only 80cm and so this gives an idea of just how tiny the calf is which our keepers are taking care of! Another feature which makes this small antelope distinctive is its prehensile nose, which can be freely moved around and is slightly forked at the end which helps the dik-dik to grasp food when browsing on bushes.  Males are easily distinguished from the females as they have horns which can grow to 11cm in length!

Colchester Zoo now has four Kirk’s dik-dik's; Dkarai's parents, mum Daenerys and dad Demetri and another adult female named Dalila. Daenerys was born on 20th January 2015 at Berlin Zoo and arrived in 2016. Demetri was born on 11th December 2015 at Antwerp Zoo in Belgium and also arrived at here in 2016. Dalila and was born 20th September 2013 and she arrived at Colchester in 2014.

Kirk’s dik-dik are currently listed as Least Concern on the IUCN Red List. Our group can be seen at the Edge of Africa, and share their enclosure with four Demoiselle Cranes.

Find out more information on how to adopt one of our Dik-dik’s here.