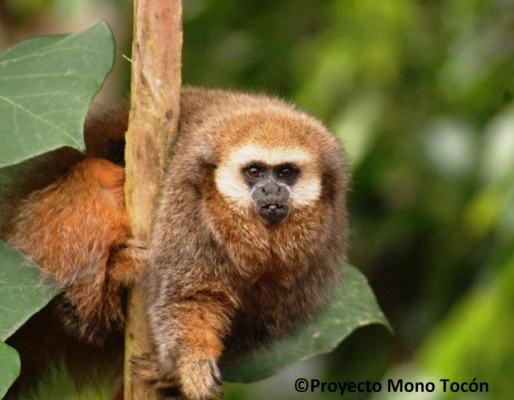 Eduardo, Clarita and their infants Elva and Timi - a family of San Martin titi monkeys - spend the first few hours of the early morning looking for food and taking shorts rests in their forest habitat in Morro de Calzada Protected Area, Peru. They hear the vocalizations of nearby groups of titi monkeys and respond to show their presence and protect their territory.

When people pass through the forest to work on their fields, the titi monkey family hides, but is not really afraid. They are curious animals and were spotted approaching people who were cutting down trees nearby, instead of running away.

Observing groups of titi monkeys is an important role carried out by conservation group Proyecto Mono Tocón. The team’s first study shows that the species is important for the forest; by feeding on fruits, seeds and flowers, the titi monkeys are dispersing seeds and helping to pollinate flowers.

Conservationists want to find out why there was no breeding in the study group last year: was it stress as a result of the high densities of titi monkeys that took shelter in the protected area when most of the surrounding forest was destroyed?

Proyecto Mono Tocón continues this good work by involving local school children in the preservation of the titi monkeys. The team has developed two new booklets featuring information about the species such as appearance, diet, habitat and conservation. The project reports that Peruvian children rarely read books and almost never own one. 'La fábula del mono tocón' (The fairy-tale of the titi monkey) and 'Librito del tocón' (titi monkey booklet) are often their first books, and when they take them home the whole family reads them. For such a cheap and easy to produce educational item, the impact is high.

Colchester Zoo’s Action for the Wild Charity has supported Proyecto Mono Tocón for a number of years and in October donated a further £1,500 towards the project’s conservation, education and research work, helping to secure the future for titi monkeys like Eduardo, Clarita, Elva and Timi.

Find out more about this project here.