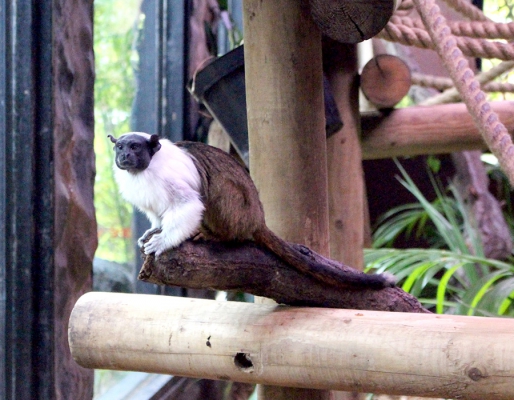 Colchester Zoo is delighted to announce that pied tamarin Teela gave birth to another pair of twins on the 23rd April 2017! The tiny new arrivals are spending most of their time clinging to their mum but it won’t be long until they are big enough to become more independent and start spending time learning from the rest of the group.

Their father, Will, arrived at Colchester Zoo in July 2001 from Montreal, Quebec whilst mum, Teela, was born on 14th December 2009 and arrived here from Belfast Zoo in July 2014.  Since Teela’s arrival, the pair have welcomed a total of 4 sets of twins!

The pied tamarin family are fed a variety of fruit and vegetables as well as a marmoset jelly which is smeared on their branches which they enjoy licking off, similar to tree sap; this also provides a form of environmental enrichment.

This species are listed as endangered on the IUCN red list and so the continued success of our breeding pair is great news for their species.

See if you can spot our baby tamarins at their home, Worlds Apart.