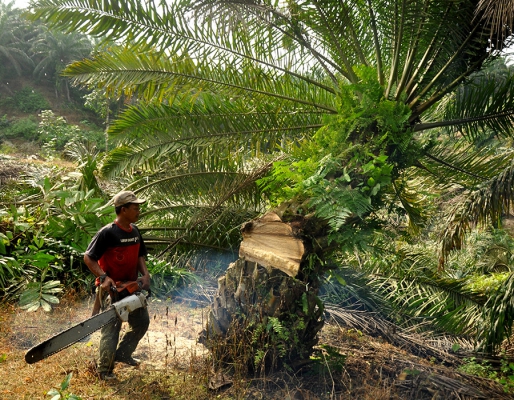 An area of the Leuser Ecosystem the size of 75 football fields, in Cinta Raja, was illegally turned into oil palm plantations more than 20 years ago.

With help from the £5,000 donation from Action for the Wild, the Sumatran Orangutan Society’s target was to cut down at least 9,000 oil palms, and then restore the land by planting thousands of rainforest tree seedlings, reclaiming vital habitat for orangutans and the countless other species that share their forest home.

Between 22-28 February 2017, more than 11,000 oil palms were cut down on the land at Cinta Raja that was being reclaimed from illegal encroachers.

In April, the field cabin and seedling nursery was built, ready to begin the second phase of the project – ecosystem restoration. The tree nursery has capacity for 30,000 seedlings to be nurtured before planting

With the support of the local community, more than 40,000 indigenous rainforest seedlings have been nurtured in the organic tree nursery. Planting began in June 2017, and the total number of trees planted to date is 33,000, representing 30 species, over 30 hectares.

There are 6 camera traps installed in the Cinta Raja restoration site. As the seedlings here are only around 6 months old, they have not seen orangutans and other larger species returning to the site yet. However, the camera traps have captured images of pig-tailed and long-tailed macaques, leopard cats, and palm civets!

When an area of rainforest is destroyed by people or companies who want to use the land to grow crops, no matter how many trees are planted, the most essential element of successful rainforest restoration is the true, deep engagement of the communities who live next to the forest in becoming its protectors, and defending its borders from future threats. So, just as they plant and nurture trees, the team in Sumatra are also putting down deep roots in these communities, transforming them into conservation ambassadors, and guardians of the ecosystem.