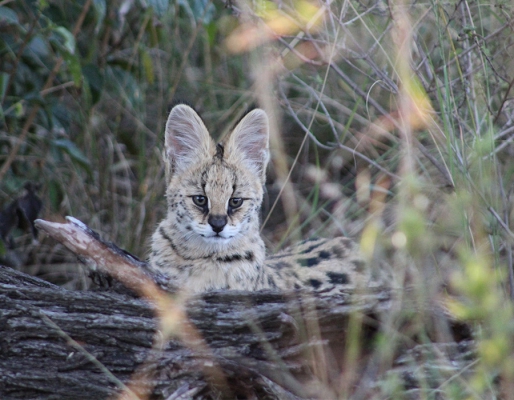 These beautiful spotted cats are found in areas with long grass, often associated with water. They specialise in preying on small mammals, in particular rodents, but will also eat birds, reptiles and bugs. Servals are commonly recorded from most major national parks and reserves. Their status outside national parks, on reserves such as Colchester Zoo's UmPhafa Reserve, is uncertain as they are inconspicuous. They may be common in suitable habitat, and as they are tolerant of the farming practices surrounding UmPhafa, hopefully with the cover and food available for them, this makes the reserve the ideal home for them.

This young serval was spotted on one of the farms on UmPhafa called Fountaindale. The team on the reserve have seen most of their serval sightings in this area, and the presence of this youngster shows there is a breeding pair in the area.